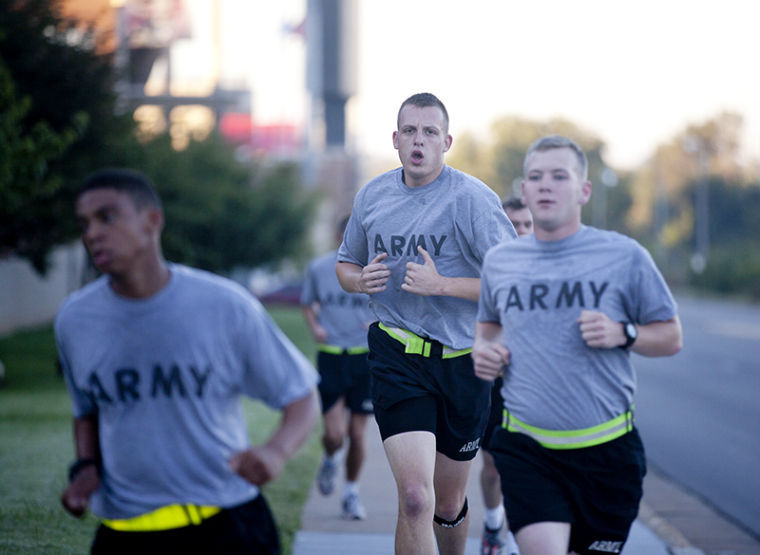 Bowling Green senior Tanner Hall runs down University Boulevard while working out with WKU's ROTC Battalion at the Diddle Auxiliary Gym on Oct. 8. Despite the government shutdown, the cadets continued to train on their regular schedule, as very few ROTC employees at WKU were furloughed. "It affects us a little," said Cadre Chris Bradley. "But we'll overcome it."

As of Oct. 1, the United States government entered a shutdown. With government offices closed, websites offline and government employees jobless and without pay, effects have trickled down to state universities.

A dispute on a spending bill between the House of Representatives and the Senate caused the government to be sent into the first shutdown experienced in 17 years.

According to the Constitution, Congress is not allowed to spend money unless a spending bill is agreed upon by both chambers. The House, controlled by Republicans, passed a spending bill that included steady spending levels for the fiscal year, but did not allow funding for the Affordable Care Act, or Obamacare.

Upon reaching the Senate, however, the bill was killed and sent back to the House. This disagreement, met with a close to the end of their fiscal year, which runs from Oct. 1 to Sept. 30, led to the shutdown. This will not end until an agreement can be reached, and the president signs an approved spending bill.

WKU has not been immune to the effects of the shutdown, with various departments left unable to complete research because of insufficient federal resources.

In an email sent out the same day as the shutdown, Gordon Baylis, vice president for Research, said the university is closely monitoring the effects of the shutdown, but it shouldn’t affect financial assistance for students.

However, if a student is in the middle of the verification process, there could be a delay.

“Shut down of the IRS could impact students currently in the verification process,” he said.

The shutdown is also beginning to affect classrooms, as several government websites are either shutdown, or no longer contain up-to-date information.

Catherine Carey, chair of the economics department, was preparing for a presentation when the shutdown hit.

Carey will be traveling to the annual Kentucky Economics Association conference in Frankfort this week. She will be joining a panel that will discuss the economic condition of the state. Due to the shutdown, however, she has been forced to leave out information from her presentation, as it was unattainable.

“Fortunately, I had a lot of data prior to it shutting down, but I can’t really supplement it,” she said. “There will be times when I’ll have to say the data is not current because I was not able to access it before the shutdown. It’s frustrating because there are other little pieces out there I know I can’t get.”

Carey predicts that, should the shutdown continue, federal economics workers will have to estimate back to obtain facts and figures to avoid holes in national data. Currently, there are not workers out surveying to obtain the current unemployment rate, Consumer Price Index numbers and more.

“In macroeconomics, I pull up data and charts practically every day, and I can still get that data because the reserve provides a lot of it, and they haven’t shut down their sites, but it’s not being updated,” Carey said. “In a few months, I won’t be able to talk about what the unemployment rate is, what the CPI is, latest GDP figures – those things come out monthly.”

National museums and parks, such as Mammoth Cave National Park, are closed as a result of the shutdown. Campers on the grounds of the park at the beginning of the shutdown were given two days to leave and all other visitation was barred and will remain so until the shutdown ends. Staffing at national parks has been cut to the minimum necessary, enough for general upkeep and security purposes.

This greatly affects the geography and geology department, who take groups of students on research projects to Mammoth Cave throughout the semester.

“The fact that Mammoth Cave is the biggest cave in the world and still being explored is an incentive,” he said. “Most semesters there’s several of us that take students to mammoth cave for a geography class.”

Groves, who has taken part in the program for several semesters, said any future trips are on hold until the shutdown ends.

“Right now, we can’t make any plans on it, there’s no one there,” he said.

“There is several of us working on a grant from the national park service in several departments across campus,” he said. “It’s a grant to do a natural resource assessment for the national park.”

After completing paperwork, the project start date was set for Oct. 1, which Groves now finds ironic.

“We had everything in place and we got an email around ten that morning, of October 1st, saying, ‘Well, you must cease work on this project,’ and we had been going for like an hour,” he said.

While they are not federally funded, WKU’s Police Department is also facing issues caused by the shutdown.

Under the Jeanne Clery Act, students have a right to access campus crime information and statistics for their school and any other school in the country. This information is stored on a section of the Department of Education’s website.

Since the shutdown, the website has been closed, causing WKUPD to be unable to update the website on campus crime statistics. Daily reports, as well as a required annual report, are unable to be submitted until the shutdown ends.

“Now I’m just kind of twiddling my thumbs, waiting to hit the enter button, and I can’t do that until the website opens back up,” Dominic Ossello, chief communication officer at WKUPD, said.

Annual reports containing campus crime statistics are supposed to be submitted and filed with the Department of Education by Oct. 16. Due to the shutdown, however, the website schools use to submit this information is unavailable.

Bonnieville junior Bryon Thompson, 200 level cadet, said he is a member of both ROTC and the National Guard.

“ROTC has been carrying on as usual,” he said. “We’ve still been doing PC and labs on same days, but no discernible effects. National Guard has had to cancel a couple of drills due to lack of funding.”

Speaker of the House John Boehner and President Barack Obama are currently at a stalemate regarding negotiations to end the shutdown, both having stated terms and grounds on which they will negotiate.

If resolutions are not made by Oct. 17, the country nears the risk of defaulting on it’s debt. This would result in the value of U.S. currency falling dramatically, a loss in reserve currency status and potentially lead to a several-year long world recession.

Obama announced yesterday that he will begin meeting with lawmakers representing both parties to discuss the shutdown, the looming debt crisis and the stalemate.