Aulbach: Toppers dug their own grave against ULL 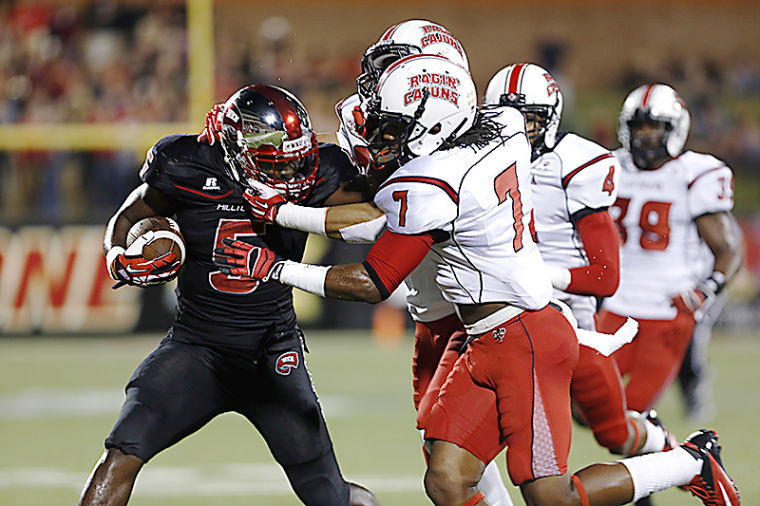 Stop me if you’ve heard this one before — WKU jumped out to a solid lead early on Tuesday night before turnovers and a poor second half showing doomed the team to another loss.

Sound familiar? It’s been the storyline off all three Topper losses so far this season.

WKU (4-3, 1-2 Sun Belt Conference) roared out of the gate Tuesday night against Louisiana-Lafayette, dropping a touchdown and a field goal on the Ragin’ Cajuns in two of the first three drives.

When junior quarterback Brandon Doughty threw a 99-yard pick-six on the run midway through the second quarter, though, the wheels fell off. ULL took the Toppers to halftime tied 13-13 before owning the second half en route to a 37-20 win.

Doughty finished the night 18-of-23 with one touchdown and two crucial interceptions. While that pick-six was a bad one — and coach Bobby Petrino took credit for it after the game since he called the play — the loss is far from Doughty’s fault alone.

Part of the blame should be on the Topper defense. After shutting down Navy’s top-ranked rushing offense on Sept. 28 and holding Louisiana-Monroe to 116 rushing yards last week, WKU gave up 254 rushing yards to the Ragin’ Cajuns Tuesday night, including 198 in the second half.

Doughty wasn’t the only one who lost the ball, either. Junior tight end Mitchell Henry had a pair of lost fumbles that resulted in two ULL touchdowns on the ensuing drives.

A big culprit in the loss, though, was the play-calling. ULL came into the game giving up an average of 167 rushing yards. On three 4th-and-short plays, Petrino and the Toppers elected to throw the ball or keep it in the quarterback’s hands instead of let senior running back Antonio Andrews — the NCAA’s leading rusher at this point in the season — get his hands on the ball.

While ULL is a strong team — there’s a reason they were on of the Sun Belt’s preseason favorites — the turnovers and missed chances were what buried the Toppers, Petrino said after the game.

While the offense has had sharper nights, I have a feeling the Topper defense is looking at a long day at practice tomorrow.

The strength of the Ragin’ Cajun rush attack was obvious coming into the game. ULL leads the Sun Belt in rushing yards per game and featured two of the conference’s top-10 rushers, and that’s without taking into account dual-threat quarterback Terrance Broadway.

The Toppers knew the Ragin’ Cajuns were going to keep it on the ground for most of the night — they just couldn’t stop them from picking up big yards. ULL had six runs of 10 yards or more in the second half alone Tuesday night. Broadway only had to complete five passes to secure the win.

A lot was on the line Tuesday night —  Petrino made it clear after the game that winning the Sun Belt title would be a difficult task with two conference losses at this point in the season. WKU has five more games, however — the Toppers came back from plenty of tough conferences losses last season and still made a bowl game. It’s possible.