Artist-in-residence gets her own exhibit 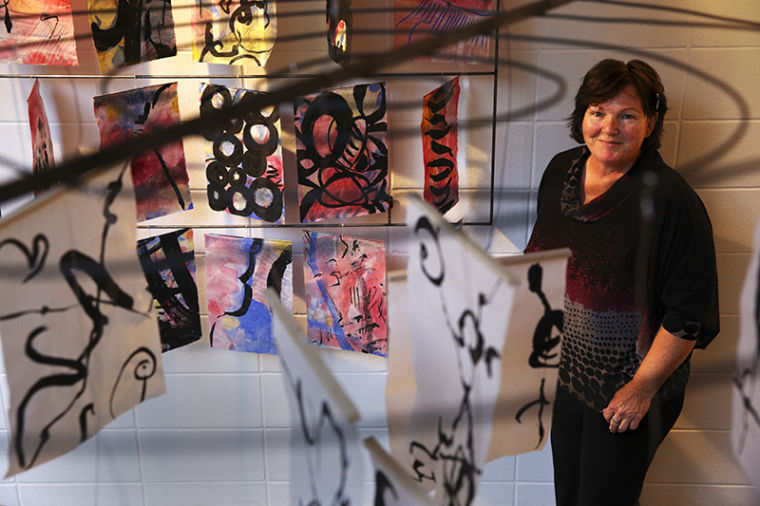 WKU alumna Lynne Ferguson stands among her art exhibit, which includes paintings on rice paper. The exhibit will have an opening reception Friday at 5 p.m. and remain open until Dec. 15 in the Kentucky Museum. "I like working with rice paper because the art work moves when you walk by it," Ferguson said.

The exhibit, which will be on display in the Kentucky Museum, consists of approximately 25 of her pieces, which Ferguson said are nonrepresentational or are abstracted from nature, adding that the collected pieces are “mixed media drawings…and kinetic works that move.”

She said each mixed media piece makes use of multiple art media, including ink, pencil, oil pastels and paint.

“They move just by people being around them,” she said. “They’re so very light, they’re on rice paper, and when you move by them, just the movement of the air causes the works to move.”

Ferguson said the theme of the exhibit is movement and paper.

She compared two of the moving pieces to mobiles, saying the painted pieces are suspended from a wire frame.

“Normally, we don’t do one-person shows, but for hers, it’s kind of a special thing since she is on staff and she’s our artist-in-residence,” Parker said.

Parker said the only other exhibit dedicated to one person in the Kentucky Museum is one that showcases the work of Bowling Green-born artist Dorothy Grider.

Parker said Grider, who died in 2012, was known for her illustrations for children’s books and greeting cards.

She said Grider’s estate has donated some of the artist’s work to the Kentucky Museum.

Ferguson said her exhibit opens this Friday during the Bowling Green Gallery Hop, an event that is scheduled to take place from 5 p.m. to 8 p.m.

She said numerous galleries and art venues will be open to the public for the event.

“During the gallery hop, the museum is open free of charge for the public, and that’s when the reception is,” Ferguson said.

She said Mass Media and Technology Hall and the Fine Arts Center will also feature art exhibits during the Gallery Hop.

“People in the community and on campus go around to the different galleries and venues, museums, art centers and there’s other nonprofits, and they look at the work, and everybody’s open free to the public for three hours,” Ferguson said. “It’s just a way to showcase art in the Bowling Green Area. Some folks come in from out of town, but there’s three places on campus that participate, which is wonderful.”