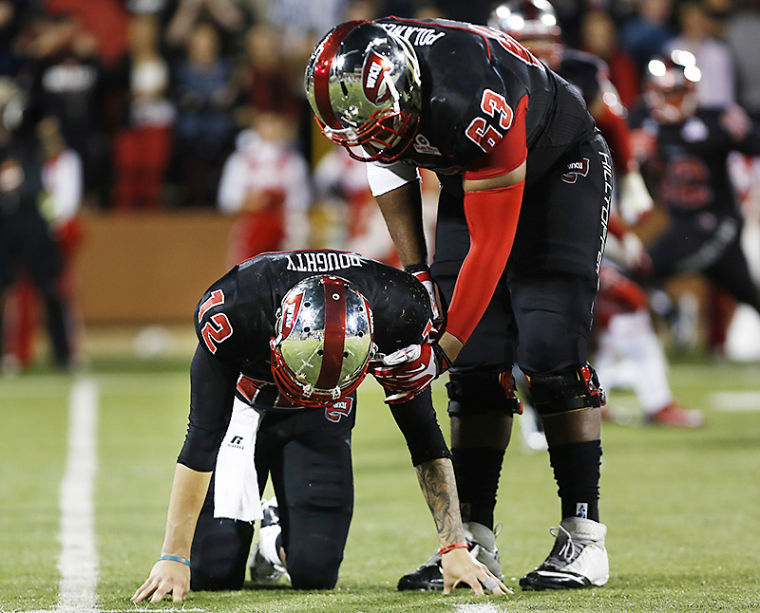 WKU's quarterback Brandon Doughty is slow to get up after being hit during their game against Louisiana at Western Kentucky University on Tuesday, October 15, 2013.

WKU had 12 days to sit on an impressive win over Louisiana-Monroe before Tuesday night’s nationally televised game at Smith Stadium against its other conference foe from the Bayou.

ESPN2, a blackout game, and a three game win streak should have given the Toppers enough hype to continue their winning ways against Louisiana-Lafayette, but the result was everything they didn’t want.

WKU now has 11 days to correct its mistakes before hosting Troy for Homecoming on Oct. 26.

According to coach Bobby Petrino, there were plenty of mistakes that cost the Toppers the game.

Turnovers continue to plague the Toppers as they gave the ball up four times on the night, including one moment which shifted the momentum of the game for the worse for WKU.

On a 4th-and-goal at the 1-yard line midway through the second quarter, Petrino rolled the dice and went for it, which the Toppers have converted 50 percent on this year.

Rather than running the ball so close to the end zone, Petrino called a play-action pass play. Junior quarterback Brandon Doughty was pressured into an interception to ULL defensive back Al Riles that was returned for a 99-yard touchdown.

Petrino said he blamed only himself on the decision to go for it.

“We ran it three times in a row there the first time and weren’t able to get it into the end zone,” Petrino said. “Looked like two of them would score so we felt like we had a chance, but it ends up being a bad call and it certainly affected the outcome of the game. Like I said, that’s on my shoulders.”

The Toppers end up unsuccessful on all four 4th-down attempts of the night, playing a major factor into the team’s second conference loss.

Doughty ended the night 18-of-23 for 260 yards, with one touchdown and two interceptions. He was replaced for a time in the fourth quarter by sophomore quarterback Nelson Fishback, who completed 5-of-6 passes for 78 yards.

With a chance to knock the Ragin’ Cajuns from the top of the conference standings, junior wide receiver Joel German knew the implications riding on the game.

“There was a lot at stake tonight,” German said after the loss. “We really want that Sun Belt Championship, but we have to put it behind us and work on Troy.”

German, who caught four passes for 67 yards, and the offense didn’t have much of a chance in the second half to put in time on the field.  The Ragin’ Cajuns didn’t need quarterback Terrance Broadway to put the game on his shoulders to take down WKU this year — instead, ULL held the ball for 20:35 in the second half and gashed the WKU defense behind 117 yards from Harris and 71 rushing yards from fellow running back Elijah McGuire.

Broadway had a 1-yard touchdown run and threw for a score with only five completed passes.

Senior defensive back Arius Wright knew the defense would have to shut down Broadway, and they were ready to stop the conferences top rushing offense.

“Going into every game you know a team’s going to run the ball so that’s the first thing you’ve got to be prepared for,” Wright said. “When you get the amount of yards running like they did then, what else can you expect for them to do but run the ball.

“It hurts a little bit because we pride ourselves on stopping the run, but there’s nothing we can do about it now. We just have to put the game behind us and move on to Troy.”

The loss drops WKU to No. 6 in the Sun Belt standings, a place that makes WKU’s chances of a conference title that much harder to achieve.

“It’s disappointing to me because we knew going in we had to win all our home games in order to win the conference and we didn’t do that,” Petrino said. “We still have opportunities ahead of us to win enough games to get to a bowl game and send the seniors out with a good year.”