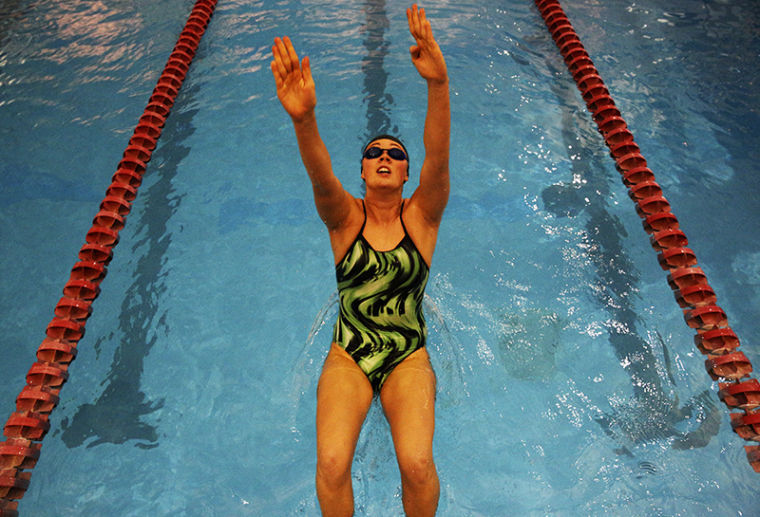 Murfreesboro, Tenn., freshman Aubrey Grensing practices her back stroke start at the Preston Center on Tuesday before the WKU swim team meet on Friday against Northwestern.

After a strong outing in their first meet of the season, WKU’s swimming and diving teams are set to face one of the toughest foes on their schedule at the Bill Powell Natatorium this Friday.

The meet against Northwestern at 2 p.m., will be the first home meet of the season for the Topper teams. Saturday also serves as the alumni meet, as WKU continues to celebrate Homecoming.

The Toppers started off the season against Delta State on Oct. 12 in which WKU swimmers won 23 out of the 28 individual events.

The Topper teams took home the win that day, but also made history as sophomore Giorgi Meyer set a school record for the one-meter boards and for zones at the NCAA championship in the process.

Junior Claire Conlon said the hot start to the season has given the athletes some confidence as they look to the next meet.

“The win has helped us realize what we need to work on in the upcoming weeks,” Conlon said after practice Tuesday. “It has boosted our ego a little bit, but we’ve been training really hard this week so we should do well.”

The Toppers will have to do well if they will want to compete with Northwestern.

The Wildcats come into the meet with a recruiting class ranked No. 16 in the nation. They won their first meet of the season against Eastern Michigan and are predicted to have several swimmers in the NCAA Championships later this year.

The competition may be raised, but coach Bruce Marchionda said his teams are ready for the challenge.

“We want to be competitive against a very good Big 10 team that doesn’t have many weaknesses,” Marchionda said. “This will be a good test to see where we are as a team and what we need to work on. The biggest challenge will be mentally. Are we going to cower to the level of the competition we will be up against this week, or will we step up and fight.”

This week’s meet will also be the alumni meet, where past swimmers of the team will come back to watch the team swim at home.

The pressure is on the team since it’s the first home meet of the season, Conlon said, but the environment also makes them more comfortable in the water.

“Everything is familiar when you swim at home — the blocks and the walls — it makes swimming much easier,” Conlon said. “It especially helps when other student athletes or friends come to watch. It gives you an added boost.”

WKU and Northwestern will begin swimming at 2 p.m. Friday at the Bill Powell Natatorium at the Preston Center.

Junior T.J. Bland said WKU will be able to hold its own against the Big 10 opponent if the Topper swimmers stay mentally tough.

“If we stay motivated and have the right mental approach, we can compete against anyone,” he said.