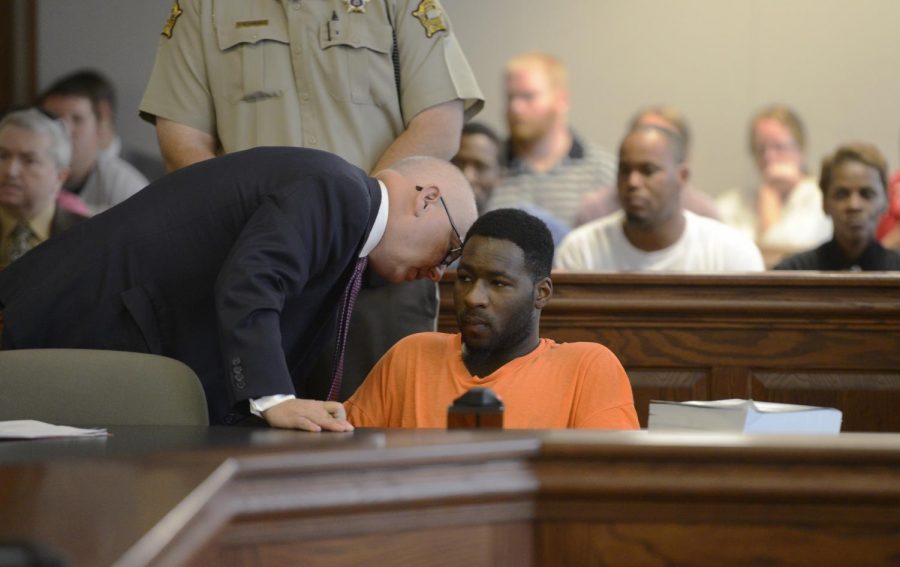 WKU student Dominique Wortham's attorney Alan Simpson, left, talks to his client during a preliminary hearing at the Warren County Justice Center on Wednesday Sept. 18, 2013.  Wortham, along with Adriana Mason, 19, of Paducah have been charged with the murder of WKU freshman Larry Thomas.

Both Wortham and Mason are being held in the Warren County Regional jail on $1 million bond for the alleged murder of Thomas. Judge Sam Potter found probable cause to hear the case. The two will go before a grand jury at a later date.

Using testimony from Mason, whom BGPD identified as to having contact with Thomas the day of his death, BGPD began to put together a timeline of events, Davis said.

According to Mason’s testimony, Davis said Mason met with Thomas, hanging out with him throughout the day, while relaying messages of Thomas’s activities to Wortham. Inside Thomas’s apartment, Mason planned to distract Thomas by getting him in the shower, while she unlocked the door for Wortham to enter the apartment, steal the money, and leave.

When Wortham couldn’t find the money by the time Thomas got out of the shower, a fight broke out between the still nude Thomas and Wortham, Davis said. The two fought for control of Wortham’s firearm, eventually resulting in a single gunshot to Thomas’s stomach, and later his death at the Vanderbilt Medical Center on Sept. 3.

BGPD and the Paducah Police Department spoke with Mason before arresting Wortham. After Wortham’s arrest, Mason was brought into custody.

Editor’s note: This story was updated to correct an error in the last paragraph and charges against Wortham and Mason were clarified. 1:24 p.m.