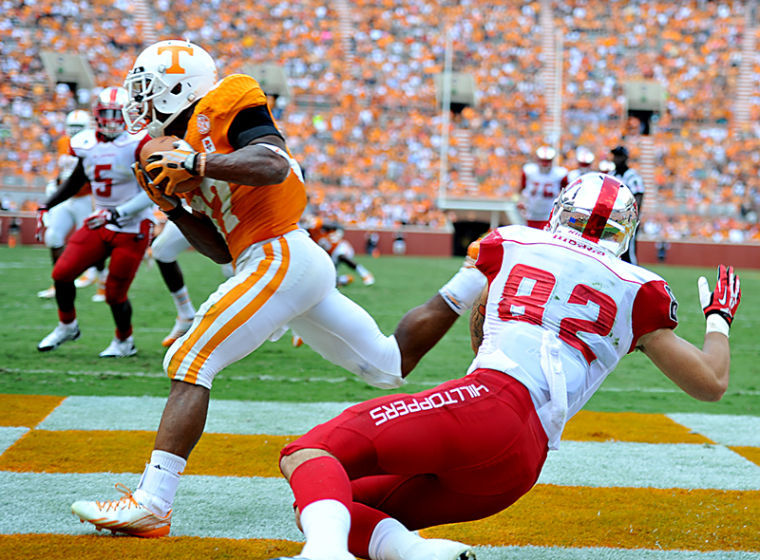 Tennessee sophomore Brain Randolph intercepts a pass in the end zone in the 4th quarter during Saturday's 52-20 loss to Tennessee at Neyland Stadium.

The Toppers committed five turnovers in six plays during the first quarter to plague WKU in a 52-20 loss to Tennessee.

Sophomore quarterback Damarcus Smith, Doughty’s back-up, saw his first regular season action after Doughty was pulled from the game for throwing his fifth interception early in the fourth quarter.

Coach Bobby Petrino said he had never seen anything like what his team committed in just six plays.

“We just got beat,” Petrino said. “We dug ourselves a hole in the first half and I don’t know that I’ve ever been through the five turnovers that we had, two of them for touchdowns.”

WKU edged Tennessee out in most categories of the game.

But in the category of turnovers, WKU lost seven, while the Volunteers gave up only one.

“I don’t remember that many interceptions and that many turnovers back to back to back,” Petrino said. “I was encouraged by the way we drove the ball and moved it in the second quarter and I felt like we got back in the game.

“…They made a lot of plays and we didn’t make enough.”

Junior quarterback Doughty’s day was one he would probably like to forget. The junior completed 17 passes on 34 attempts — he connected with freshman wide receiver Nicholas Norris once for a touchdown but found five Tennessee defensive backs on other occasions. He finished the game with one touchdown to five interceptions.

Junior wide receiver Willie McNeal said the team shot themselves in the foot and Doughty never gave up on himself or his teammates.

“Brandon was one of those guys keeping everybody up telling everybody ‘we’re alright, we’re going to bounce back’,” McNeal said. “He didn’t have his head down. You make mistakes and he played a bad game. That’s part of football.”

Like week one’s opening drive against Kentucky, WKU received the opening kick and produced a methodical drive resulting in an early 3-0 lead for the Toppers.

WKU stopped the Volunteers’ opening drive, and then the turnovers happened.

Doughty’s first interception turned into Tennessee’s first score of the game. Doughty’s pass to Taywan Taylor bounced off the receiver’s hands into the air where defensive back Justin Coleman waited to haul the deflected pass in and returned it 23 yards for a touchdown.

On the Toppers’ second play after the first turnover, Tennessee defensive back Cameron Sutton jumped in front of Doughty’s pass and jogged untouched to the orange and white checkerboard end zone.

WKU settled down in the second quarter with two solid drives that brought two touchdowns to cut the Tennessee lead to 31-17 at halftime.

Tennessee outscored WKU 21-3 in the second half where Petrino said the Vols had their way with them.

Despite one of the team’s five consecutive turnovers coming from junior running back Antonio Andrews, the senior averaged 8.5 yards per carry on his way to 111 total rushing yards on 13 carries. Andrews finished the afternoon with 207 all-purpose yards.

Sophomore Leon Allen followed for relief, with 58 yards on 13 carries and a touchdown.

Petrino said the team will take what they learned from this game to prepare them for their first conference game next weekend at South Alabama. The coach said today, Tennessee was just the better team.

“In the second half they just took over and just beat us up,” Petrino said. “They ran the ball when they wanted to, how they wanted to, and we weren’t able to get the ball in the end zone offensively.

“We’ve got a lot work to do. We’ve got a lot to learn from this game and come back with a great attitude in practice this week and get ready for our conference opener.”

WKU will begin Sun Belt Conference competition next weekend with a trip to Mobile, Ala., to play South Alabama at 6:30 CT.