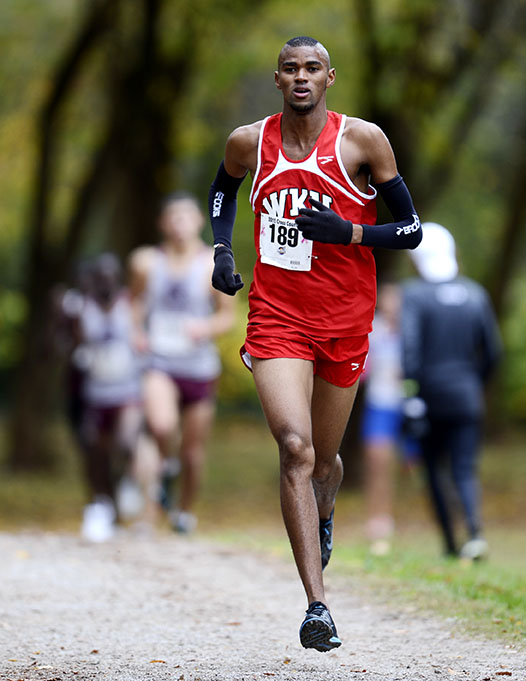 Success is something that has come to be expected from David Mokone. The junior cross country, indoor and outdoor track and field runner has had a lot of success since he got to WKU.

Mokone is from Bultfontein, South Africa, a small town in the central part of the country. He grew up running track and field and came to WKU in the spring of 2011.

In his first year on the Hill, Mokone only ran indoor and outdoor track as a long-distance runner. He did well enough to qualify for the NCAA East Prelims in outdoor track and field, and had three All-Sun Belt Conference performances at the league championships.

In the 2011-12 season, Mokone began running cross country as well. He finished in the top 10 in three of five meets and earned Sun Belt Freshman of the Year honors. He finished No. 4 at the Sun Belt Conference Championships and was named to the All-Sun Belt Conference team. He also broke the WKU indoor 800-meter record at the SPIRE Invitational, a record that had stood since 1989.

In his second season on the cross country team, Mokone recorded two top-10 finishes in six meets and was the Toppers’ second finisher in every race. He also received second-team All-America honors in both indoor and outdoor track and field for his performances at the NCAA Track and Field Championships.

Mokone said his proudest cross country achievement was placing No. 7 in the Greater Louisville Classic in 2011.

“Greater Louisville is one of the most prestigious races in the country”, said Mokone. “I was very proud of that.”

Mokone gained valuable experience throughout his career by running with accomplished runners such as Joseph Chebet and Deus Rwaheru — both All-Sun Belt performers during their time on the Hill. Head coach Erik Jenkins said he thinks that experience has helped his development.

“David’s a guy that has had the luxury of running and training with great guys, and he’s learned from them,” Jenkins said.

Over the years, Jenkins said Mokone has worked on elevating both his physical and mental game. His versatility is what really sets him apart from other runners.

“Cross country is his third sport. Obviously he was an All-American in both indoors and outdoors (track and field),” Long said. “You don’t find many people who can run a leg on your four-by-four and then also compete at the national level at 10,000 meters.”

With such a young team this season, Jenkins looks to Mokone to be a leader. The soft-spoken junior said he prefers to lead his teammates by example rather than vocally.

He leads in the way he approaches challenges — by having confidence in what he’s doing, and the younger guys follow along, the coach said.

“I’m not a vocal leader at all. I tend to keep to myself,” Mokone said.

Jenkins knows Mokone can succeed even more than he already has, but he has to follow a few words of advice.

“Race hard, stay hungry and stay humble, and he will be successful,” said Jenkins. “He’ll be a good one.”

Mokone said he has lofty goals for this cross country and track and field seasons.

“My goal for this year is to run to the best of my ability and make it to nationals,” said Mokone. “I know that is a gigantic goal, but I’ve been working hard to achieve it.”