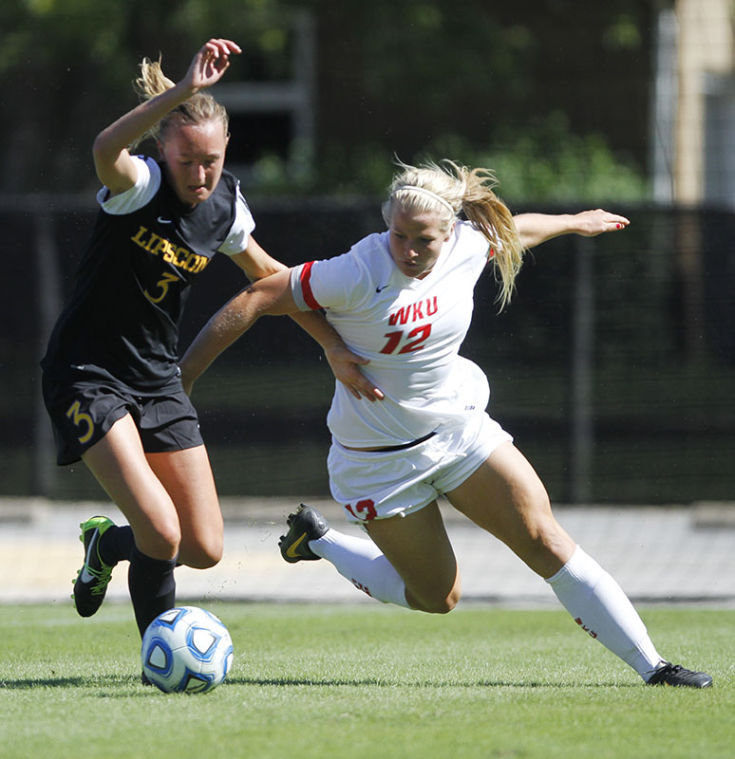 Freshman Iris Dunn fights off Lipscomb freshman defender Carlotta Fennefoss while attempting to gain control of the ball during their game Sunday.

After picking up a much-needed win Sunday against Lipscomb, the Lady Toppers will look to turn on the jets this weekend as they enter Sun Belt Conference play with a pair of games at the WKU Soccer Complex.

While no conference games have been played by any Sun Belt teams thus far this season, the Lady Toppers currently sit at No. 5 in the conference standings after a tough non-conference schedule.

The Lady Toppers will square away against Louisiana-Monroe Friday. The Lady Warhawks currently sit at No. 3 in the conference, and are winners of four of their last six games.

ULM has been hot lately — the team’s only loss since Sept. 1 was a game against Central Arkansas last Friday.

This matchup will give the Lady Topper defense a full plate — the Lady Warhawks have scored 25 goals this season to WKU’s six.

The Lady Toppers are confident heading into the start of their conference schedule, though.

Goalkeeper Nora Abolins has already dialed in two shutouts in her senior campaign — her first season in a Lady Topper uniform.  She also has only allowed more than one goal in two games this season for WKU (2-3-4).

Sophomore midfielder Chandler Clark will go into Friday’s match as the SBC Defensive Player of the Week, an award she earned after she helped hold down the back line and scored a goal against Lipscomb last Sunday.

Offensively, the Lady Toppers nabbed three goals in two contests for a win and a tie last weekend. They will look to take advantage of a shaky Lady Warhawk defense that has allowed 24 goals this season, compared to nine by WKU.

“We grinded a little better (against Lipscomb), than we did (against Belmont last Friday),” coach Jason Neidell said, referring to the spike in offensive performance he has seen out of his team.     “Sometimes that’s what games are about — they’re about grinding out the win, and I think we’re doing a better job of that.”

The Lady Warhawks have had serious trouble playing on the road this season. They have let Southern Methodist, LSU and Central Arkansas score six goals on them, with all of those losses coming on the road.

Sunday’s contest will pit the Lady Toppers against Louisiana-Lafayette, perched a slate above them at No. 4 in the SBC.

The Ragin’ Cajuns only road game of the season thus far yielded them a loss at Ole Miss in August. ULL has won three of its last five games, scoring 16 goals and conceding only six.

Senior left wing Andrea Curry said the Lady Toppers know they have an uphill battle going into the next month of competition. WKU will face all eight of the other Sun Belt teams in the next month.

“We are finally implementing things into our game that we have been working on in practice, so it is really good to see that happen,” Curry said. “A lot of ties have been coming in lately, so it’s relieving to see some goals come in recently and see a result.”

Sophomore defender Alanna Clancey, who netted the game winner last weekend against Lipscomb, knows the importance of being able to play a full 90 minutes of competition and be able to finish off as strong as they started.

She said last week’s win at Lipscomb could be an important moment for the team moving forward.

“It was really important for us,” Clancey said. “We had been tying the last couple games and we didn’t want to go into overtime.  We had been talking about how we need to be able to push through and win.  It was a turn-around for us.”