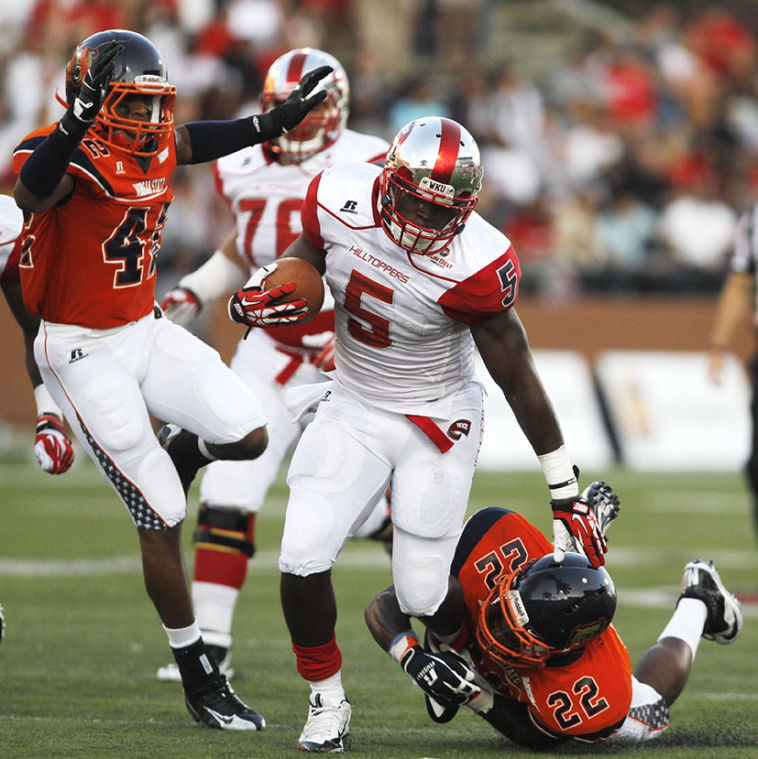 Saturday night’s 58-17 thrashing of Morgan State was just what the doctor ordered for WKU’s confidence heading into this week’s contest with the Navy Midshipmen.

Coach Bobby Petrino stuck to the theory of feeding the studs by giving senior running back Antonio Andrews the opportunity to make history Saturday evening. The running back rushed for a school record five touchdowns behind 291-all purpose yards, including 213 rushing yards on 17 carries.

The coach even set up the series for Andrews to earn another mark in his already decorated WKU career.

“Coach Petrino told me about it on that last series and he was like ‘go get the record,’” Andrews said.

Andrews wasn’t the only Topper that showed out in a win that WKU expected to take. Senior linebacker Xavius Boyd was named by the Sun Belt Conference as the Defensive Player of the Week, after recording 11 tackles on the Bears and junior safety Jonathan Dowling earned the SBC Special Teams Player of the Week award after his 70-yard return for a touchdown off a blocked field goal attempt.

“I thought our special teams, particularly the kickoff coverage team, really set the tempo that we were going to play fast and physical,” Petrino said. “Our defense was flying around and doing a good job of tackling and playing physical.”

Finding the end zone from outside the offense is something Petrino and his staff have pushed for out of their players all year, the coach said.

Midway through the fourth quarter, senior linebacker Chuck Franks came through with the idea and brought down Morgan State’s Tracy Martin for a safety.

“One of our goals each week is to either score on special teams or set up a score and we certainly did that,” Petrino said. “We got the blocked field goal scoop-and-score. That’s nine points right there. That is huge for us.”

One facet remains in question heading into Saturday’s matchup with the Midshipmen — the quarterback role.

True freshman Todd Porter earned the starting nod while eventually, all four of WKU’s quarterbacks saw the field. In Porter’s debut, he completed 5-of-10 passes for 76 yards and an interception. Junior Brandon Doughty, who started the first three games for the Toppers, was the last quarterback to see the field, but made a strong showing by completing all seven passes for 55 yards.

Petrino wants the offense to play to its strengths and says that finding a quarterback that fits to the biggest strengths is one of their biggest challenges moving forward.

“It poses some challenges, but we created them ourselves,” Petrino said. “We had opportunities to just take care of the ball and play well as an offense and we weren’t able to do that. We have some work to do to have consistency. That’s really what we are looking for, consistency.”

The Toppers would surely like to be more consistent on the defensive side of the ball.

WKU currently ranks No. 95 in the country, allowing 195.5 rushing yards per game. Navy, historic for it’s own consistency in the offensive run game, will enter Smith Stadium with the nation’s top run game, averaging 398 yards per game.

“Defensively, we are going to have to do a really good job with our eyes and discipline because they will run it, run it, run it and then pretty soon come at you with a play-action pass,” Petrino said. “They get guys wide open sometimes in their play-action pass game, so we have to have a great week of practice.”