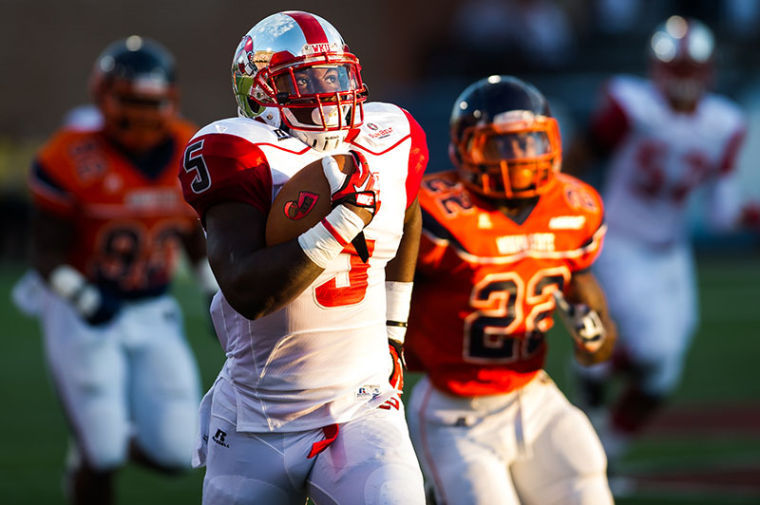 WKU's Antonio Andrews looks at the jumbotron as he returns the opening kickoff during their game against Morgan State at Western Kentucky University on Saturday, September 21, 2013.

The Toppers are holding a 42-7 lead over Morgan State at halftime of the first game of the season at Smith Stadium.

WKU (1-2, 0-1 Sun Belt Conference) has split time at quarterback between freshman Todd Porter and sophomore Nelson Fishback. Porter, the starter, currently has 74 yards on 3-of-5 passing with an interception, while Fishback has 27 passing yards, completing 2-of-3 throws, and a rushing touchdown. Redshirt sophomore Damarcus Smith had a 27-yard completion to end the half as well.

Senior running back Antonio Andrews has been the story of the game so far for the Toppers, though. Andrews has racked up four rushing touchdowns and has accumulated 146 yards on 12 carries.

The senior has already tied the WKU record for most rushing touchdowns in a game.

Other Toppers have made a difference on the ground as well. Fishback had an 11-yard run for a touchdown in the second quarter, while senior running back Keshawn Simpson has 28 rushing yards and senior fullback Kadeem Jones has 18 yards.

The Toppers also got a score on special teams with 2:36 to halftime when senior defensive back Tyree Robinson blocked a 41-yard field goal attempt. Junior safety Jonathan Dowling scooped it up and returned it for a touchdown.

This is the first game of the year at Smith Stadium. WKU opened the season in Nashville, which counted as a home game, and has spent the past two weekends in Knoxville, Tenn., and Mobile, Ala.