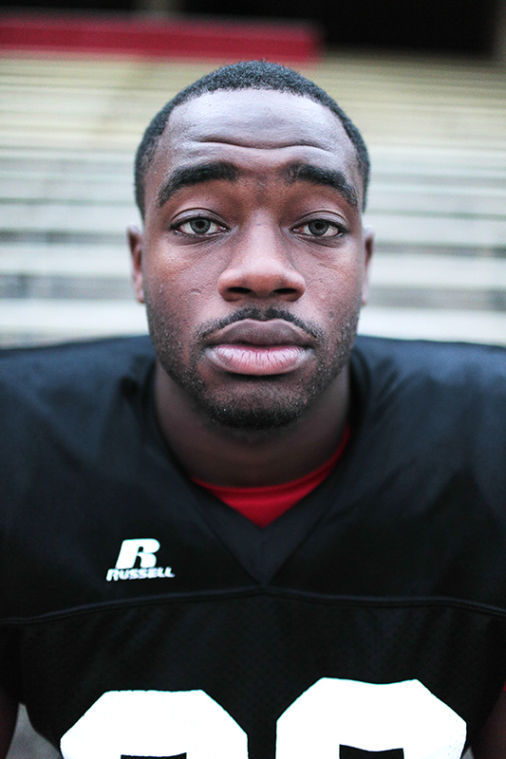 After being displaced from his home in Louisiana due to Hurricane Katrina, freshman tight end Rashaan Allen spent his high school career in Fort Knox where he lettered in eight varsity sports. Allen recently visited the White House for winning Military Youth of the Year.

There are a few fundamental techniques a football player learns from the start of his career at an early age. In football, there is a universal technique that, unless faced with out-matched size, usually wins you that extra yard — stay low, and keep moving forward. The phrase is good for football, as well as in life.

Walk-on freshman Rashaan Allen has spent the past five years traveling the country fighting for that extra yard.

It’s quick to generalize that most athletes have aspirations about playing their sport one day in college and, hopefully, professionally.  College — and athletics, for that matter — was one of the last things on Allen’s mind five years ago.

As the son of a single mother in the military, Allen doesn’t have a place to call a hometown where he learned the values he holds today. He can only point to his struggles through life that have shaped his character.

Sports were one the only things that held him together in life, and he had plenty to choose from. Football, basketball, baseball, soccer, tennis, golf, swimming and wrestling were lifeguards to Allen in high school.

Growing up as an only child to a single military parent made Allen realize that his life would always be different.

“We were always moving around and when she would deploy, I had to live with different relatives, so that was always a hard thing, especially when she deployed the last time and I had to go live with my grandmother,” Allen said. “She was sick and I had to help take care of her. That wasn’t always easy, but I really think that shaped me into the person I am today by overcoming adversity and being accustomed to new things and change.”

That final deployment for his mother, Sgt. 1st class Crystal Singer, sent Allen back to his birthplace in Greenville, Ala. That deployment came in Allen’s freshman year of high school while he lived in Fort Knox — he had only lived there for a year.

Allen not only had to take care of himself growing up, but his family. He served as a caretaker of his grandmother, who was recovering from cancer, in Alabama. Once she recovered, Allen moved to his aunt and uncle’s house and took care of his four younger cousins.

He was the backbone to his family while his aunt and uncle were at work — Allen said he was responsible for making sure his cousins got off to school in the morning, fed them when they came home and helped them with their homework when their parents were on the job.

Bouncing around took a toll on Allen. He attended eight different middle schools and struggled to fit in during his short time wherever he was.

“I tried to be with the in crowd doing things I knew I wasn’t supposed to be doing like getting in trouble in school and getting bad grades,” Allen said. “At that point in my life I thought it was cool and I was fitting in. When I started moving up, I realized I couldn’t be doing that.”

The struggles date back even further into Allen’s life. Of the many places he grew up, Algiers Parish, La., will forever be a place he never forgets. It’s the place he once lost everything at the hands of Hurricane Katrina.

“The military didn’t think the hurricane was going to come to Louisiana and it took a last-minute turn,” Allen said. “We had to end up leaving at a split second so we couldn’t take that much stuff.

“We lost our house — we lost everything we had in there.”

Allen and his mother were separated from everything. They stayed in Alabama for almost a year until they could move back to Belle Chasse, La., where Singer worked in Recruiting Command in Metairie, La.

It wasn’t long after that Allen and his mother’s life would take another turn, this time for the better.

He even remembers the date he came to the Devers Youth Center in Fort Knox. February 19, 2009, Singer brought her son to the youth center because Rashaan needed help. He needed a male role model in his life that had been absent the previous 13 years of his life.

That is when Dwight Coble, supervisor of the Devers Youth Center, stepped in and changed Allen’s life.

“He had a rough couple of first weeks at Fort Knox and his mom brought him in looking for some male role models,” Coble said. “She wanted someone that he could look up to and emulate and hopefully help him get on the right track. Through the youth center he improved his grades and turned around his demeanor.”

The Devers Youth Center and the Boys and Girls Club are the reason why Allen is where he is today, he said.

During his freshman year Allen’s grade point average was 1.5. When he graduated from Fort Knox High School in May, he had worked up to a 3.5 GPA.

Coble says that sports played the largest part in his coming up to the potential of a leader that he saw all along when he first met Rashaan. The leadership cue was there in sports — Allen captained in six of the eight sports he played and was also the president of his senior class and governor at Kentucky Boys State.

Coble said that all the good things that have come Allen’s way are a result of his own actions and willingness and a want to actually change his life, but Allen said he credits the youth center’s guidance for his accomplishments.

Allen was a forward for the Fort Knox basketball before even giving football a try his junior year but once a coach convinced him to try football, Allen was hooked.

He developed into a stellar tight end for the Eagles that earned a look from former WKU coach Willie Taggart. When Taggart took the South Florida job in December, Coble said Allen talked about going with him. But ultimately, he wanted to stay close to Fort Knox, the place he now calls home.

“He reached out to coach Petrino and his staff,” Coble said. “They saw potential in him and they let him walk on.”

Allen’s story doesn’t end here on the field or in the classrooms of Grise Hall, where he plans on majoring in political science. His journey goes further into places he never dreamed of.

Through his involvement with the Boys and Girls Club of America, Allen earned the organizations first Military Youth of the Year award. Allen receives a $20,000 scholarship and now serves as BGCA’s official youth advocate for military teens.

“It’s the highest honor a club member can have,” Allen said. “You have to show excellence in the classroom, you have to show leadership in the community as well as your home life as well as overcome obstacles.”

Allen was one of six regional finalists for the honor and made a trip not many Americans get the opportunity to experience.

On Sept. 18, Allen and the six finalists met with President Barack Obama and attended a congressional breakfast at the White House. It was there at the breakfast when Allen was announced as the national award recipient.

“I remember waking through security and getting checked about five or six times and getting patted down,” Allen said. “It was a really cool feeling. We waited in the White House for about an hour and I was getting antsy. Then (Obama) came to the door and he said ‘Hello, Boys and Girls Club youth of the year’ and my face just lit up.

“I got to meet a president, not too many people can say they’ve done that. It was just a great honor.”

Allen says the mentorship from Coble is the reason his life changed. Five years ago, Coble saw a humbled teenager looking for a change. The long road has taken Allen to places the Devers Youth Center only dreamed he would go.

“He was a youth that was needing of help and he actually had to have a want to change,” Coble said. “Once he had that want to change, we were actually able to help mold him into the person that he is today.”

As a member of the scout team for the Toppers, Allen has a long ways to go until he sees the field in major playing time. Athletes have their aspirations to excel on and off the field, and Allen’s central focus is to do what he’s done best during what has been a roller-coaster five years — stay low and keep moving forward, whether that’s on the field or in the community in which he wants to return a favor for a lifetime.

“I love giving back to the community,” Allen said. “Community service is one of my number-one things. That’s something I really strive for and I hope I can give back to this community like I gave back to my old community.”