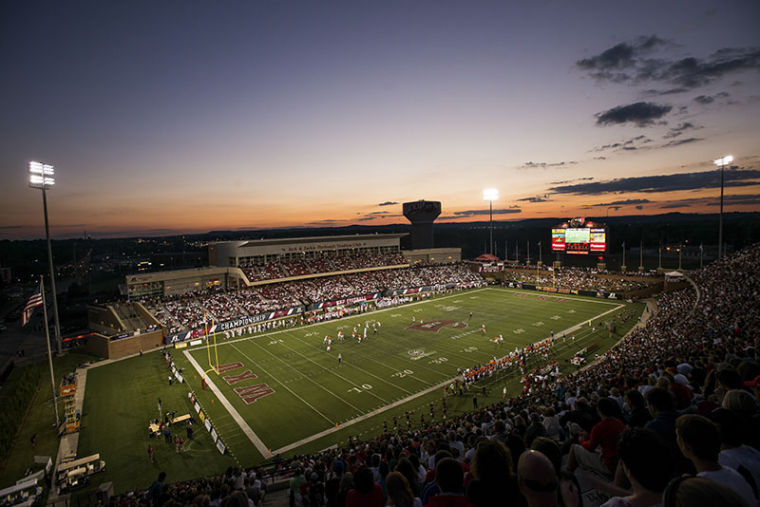 WKU takes on Morgan State at Western Kentucky University on Saturday, September 21, 2013. Western would go on to win 58-17.

The Midshipmen are historically recognized for their unique offense. The triple-option threat they pose currently has them ranked No. 1 in the nation in rushing yards per game at 395.5. The Toppers, meanwhile, rank No. 95 in the country in stopping the run. The key to slowing the Midshipmen, coach Bobby Petrino said, is for the defense to not give up the big play. Navy could be the biggest test WKU’s young defensive line will face all season.

2.)    Antonio Andrews and the running backs

WKU (2-2) ranks No. 27 in the nation in rushing yards and senior running back Antonio Andrews is coming off a historic five-touchdown performance.  Petrino said the Morgan State game showed the coaches they need to play to the team’s strengths with the “ability to run the ball and get it to guys that can make plays.” Look for coaches to feed the studs on the ground against a Navy defense that has given up an average 408 yards per game.

Who will be WKU’s starting quarterback? Nothing had been announced as of Wednesday. All four quarterbacks on the roster saw playing time in the Toppers’ blowout win against Morgan State. Freshman Todd Porter started last Saturday, after junior Brandon Doughty started the first three games. Petrino said the coaches will “go into practice and let (the quarterbacks) compete.” The starter will most likely be announced Saturday.

Despite the Toppers’ blowout win over Morgan State, quarterbacks Porter and Damarcus Smith each threw an interception. WKU still lies at the bottom of the NCAA turnover margin category at -2.5. Navy, on the other hand, ranks No. 10 in the nation with a +1.5 margin.