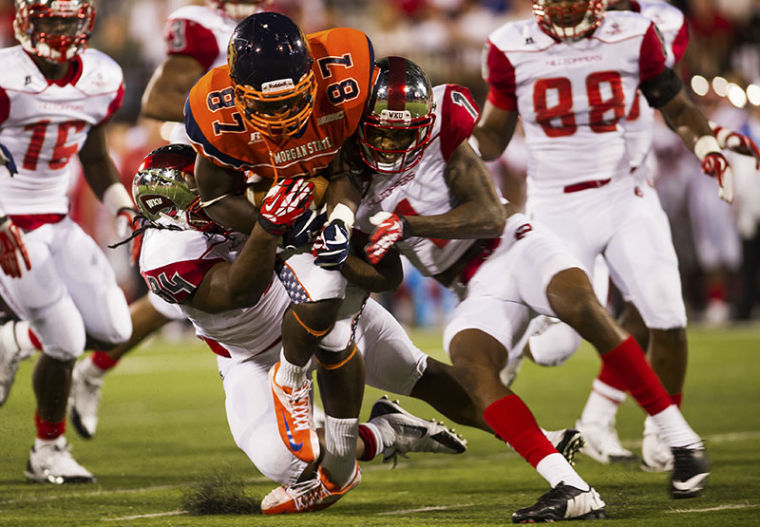 WKU has had Saturday’s game against Navy circled on its calendar for a long time.

Navy holds a 2-0 mark over the Toppers in the teams’ series, including a 40-14 route of the Toppers in the pouring rain in 2011. Outside of Tennessee, Navy may be the team that provides WKU with the biggest non-conference test of the year — especially to the Topper defense.

The Midshipmen come to Smith Stadium Saturday for a 1 p.m. kickoff with the best rushing attack in the nation, ranking No. 1 in the NCAA with nearly 400 yards rushing per game. The Topper defense has been prone to the run so far this season, ranking No. 95 in the country allowing 195.5 yards per game.

Doing what they’re coached to do in this option is something the team has worked on in several occasions since the spring. Navy isn’t the only team with a triple-option threat on the Toppers’ schedule, as WKU travels to Army, which runs a similar office, in November.

Coach Bobby Petrino said the team took 15-minute periods in nearly every spring practice to get experience in defending the option and has continued to work on it this fall.

“It’s tough,” Petrino said. “It’s a unique offense the way the line blocks and the way the cut block and everything about it is something you don’t practice all the time. It’ll be a challenge for us, but I think our guys are excited about it. They understand how good they are at doing it.”

WKU must understand how good Navy is with the run. When the two teams met last in 2011, the Midshipmen ran all over Feix Field for 410 yards on the ground.

The defense will have its hands full with a quarterback who has been good on the air and with the option keeper in Navy’s Keenan Reynolds.

Reynolds leads the Midshipmen in rushing with 236 yards on 47 carries. His play as a passer has produced 304 yards on a 12-for-17 passing resume on the season.

Reading the defensive ends is the primary objective when operating out of the option. Defensive ends coach L.D. Scott said preparation requires precision and focus.

“There’s so many different elements to an option offense – dive, pitch, quarterback,” he said Wednesday. “We just have to have our eyes in the right place and make sure everybody gets the call and gets lined up.

The Toppers stand to benefit from a win Saturday in a big way.

Petrino’s key for success is to get the Navy offense uncomfortable early in the drives and back the Midshipmen up behind the sticks early, he said.

“The number one thing we have to do is be real successful on first-and-10,” Petrino said. “If they’re making six, seven, eight yards on first-and-10 then we’re going to struggle. So we have to do a good job on first-and-10 and get them behind the sticks a little bit. You would like to see the game play out where we get some early stops and we go score some points and put some pressure on them.”