Higbee reasserts himself into WKU lineup 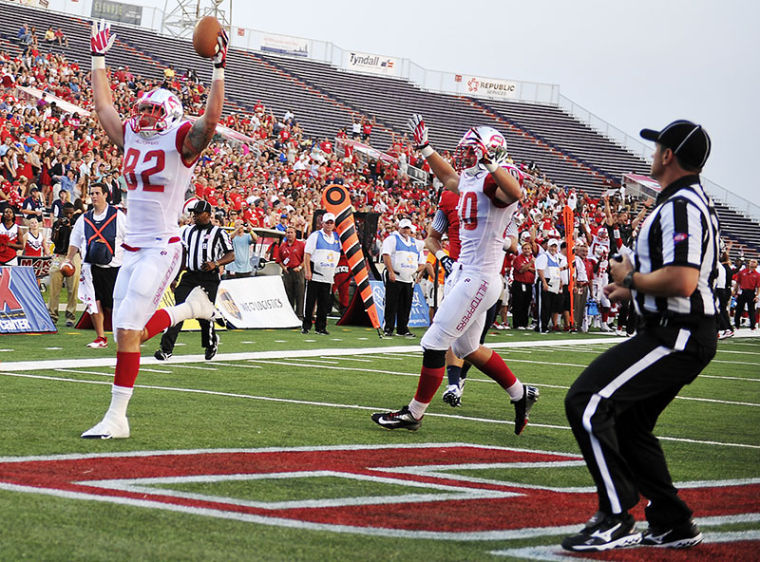 Sophomore tight end Tyler Higbee celebrates after scoring a touchdown on the first drive of the game against South Alabama on Sept. 14.

Before he graduated after last season, Jack Doyle became WKU’s all-time leader in catches and receiving yards for a tight end while wearing No. 82 on his jersey. This year, redshirt sophomore tight end Tyler Higbee has taken his number and is looking to make a similar impact on the WKU offense.

Higbee redshirted last season but was a big part of WKU during its turnaround season two years ago. He played in 11 games as a freshman recording a pair of catches for 92 yards and a touchdown as a wide receiver — the 6-5 Clearwater, Fla. native has since transitioned to tight end.

With eight catches for 108 yards and a touchdown so far this season, he said he wants to be one of junior quarterback Brandon Doughty’s favorite targets for the rest of the season.

“Every time I take the field I expect to be one of the top targets — I hope to be and I strive to be,” Higbee said after practice Tuesday. “I feel like without that attitude, you won’t be there, so that’s why I take that attitude on the field and I just work and try to be there.”

The tight end had the biggest game of his career at South Alabama last Saturday.

Higbee caught five passes for 67 yards and a score against the Jaguar defense that held the Topper offense to just 27-of-47 passing.

He said he expects WKU’s passing offense as a whole to improve as the season goes on.

“We’re 1-2 — we’re not where we want to be,” Higbee said. “Everybody’s out there working though, and we’re coming from a new offense so we’re still trying to learn some of the offense. Some people still don’t have it all together, and unless you have all 11 players doing their job, an offense isn’t an offense where you need it to be.”

Offensive coordinator Jeff Brohm said he was impressed with Higbee’s five-catch game over the weekend but he hopes to see the tight end improve going forward.

A tight end has a lot of responsibilities, he said, and it’s important that Higbee is capable to fulfill all of those duties when he’s on the field.

The coach said Higbee and junior tight end Mitchell Henry, who has eight receptions for 104 yards and a touchdown this year, need to step up if the Toppers are going to get back on track.

“We definitely need him and Mitchell Henry to be really good players for us,” Brohm said. “They’ve got to dominate in the passing game, they can’t get tired, they’ve got to be physical in the running game and set the edge. Those are two guys we need to play well.”