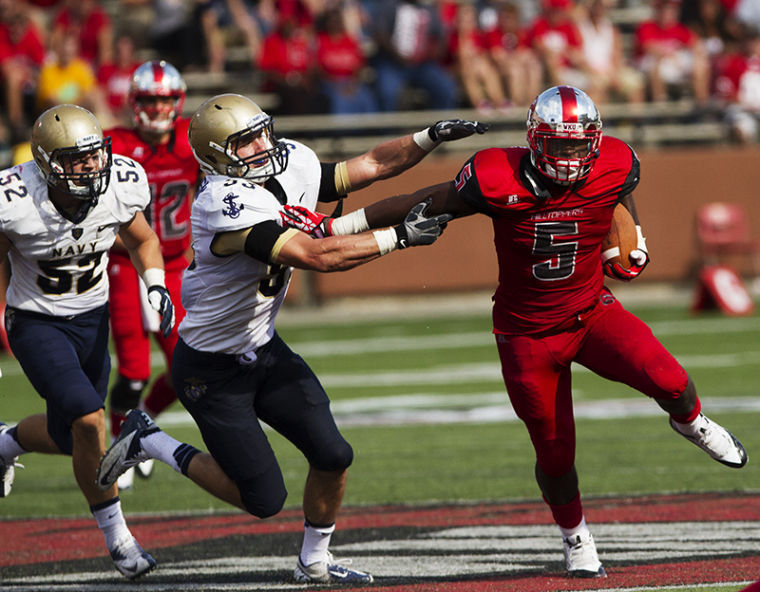 Last Saturday, Antonio Andrews ran for a school-record five touchdowns. This week, he out-performed the nations top rushing attack by himself.

The senior running back’s 32 carries against Navy were the second most touches he’s had in his career, the most being 37 times against Louisiana-Lafayette last season. He picked up 182 total rushing yards.

But Andrews not only did damage on the ground, he perked up as a receiver in the Toppers 19-7 win as well, catching five passes for 35 yards.

“He was really hot, he was really running,” coach Bobby Petrino said. “He’s a great receiver out of the backfield so he was certainly the workhorse today.”

Junior quarterback Brandon Doughty had a solid game as well, but said having Andrews to give the ball to makes running the offense much smoother.

“When you’ve got (Andrews) in the backfield, you know you’ve always got an outlet when you’re throwing the ball and when he’s running the ball like that it softens up the defense,” Doughty said. “Play action passes and stuff like that are easy when he’s out there.”

No one knew who would start at quarterback for WKU until the starting lineup was introduced on the video board a few minutes prior to kickoff.

Brandon Doughty’s efforts earned him the starting job this week after being replaced by freshman Todd Porter last week. Doughty was on target for the day completing 25-of-31 passes for 198 yards and one interception.

Petrino said they felt Doughty was “the best option” to give WKU a win, and was happy with his performance.

Doughty is aware that nothing is locked up as of yet with the starting job, but he’s not worried about it moving forward.

“I’m happy we got the win,” Doughty said. “I’m excited about the next week in Monroe and we’ll see what happens in the week of practice.”

How the defense would respond to Navy’s No. 1 rushing attack was the biggest question heading into Saturday’s game.

But Petrino and his staff knew it would be an obstacle to overcome since the schedule was released, that’s why the team has worked to defend the triple option since the spring.

It was the best team the Toppers have faced according to defensive coordinator Nick Holt.

Going into Saturday’s contest, Navy quarterback Keenan Reynolds was the leader in Navy’s run game, but a hit delivered by Andrew Jackson put Reynolds out for the game.

Back up quarterback John Hendrick could never get comfortable in the offense.

“When their starting quarterback went out of the game that helped us out because he is a fantastic football player,” Holt said. “When they had some of their backups in, we cranked up some of the pressure and really started to confuse them.”

Linebacker Andrew Jackson said the defense wasn’t aware that they had knocked Reynolds out of the game. Jackson said he wished the whole defense could speak on the defenses success against Navy.

“I’m very excited that everybody came to play, we did assignment football, played our game and executed,” Jackson said.