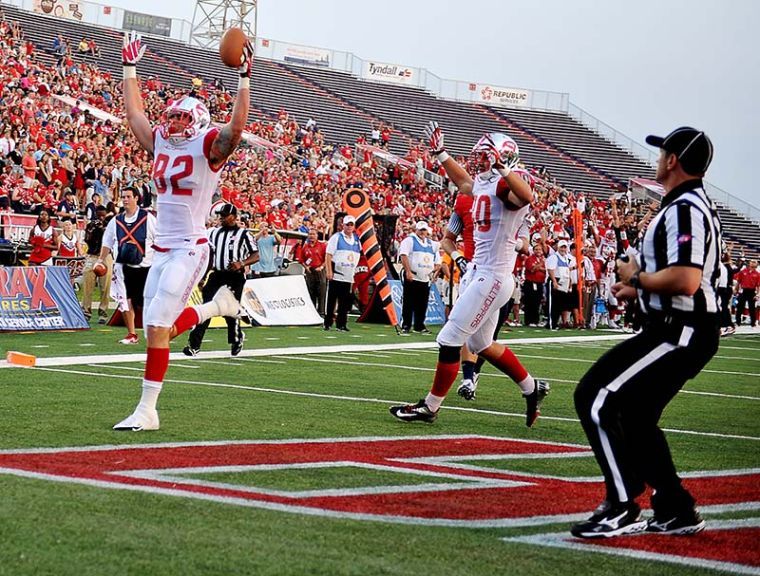 Sophomore Tyler Higbee celebrates after scoring a touchdown on the first drive of the game against South Alabama. WKU plays South Alabama on Saturday Sept. 14, 2015 at Ladd-Peebles Stadium in Mobile, Ala.

Don’t torch those season tickets yet. Saturday’s game at South Alabama was a bad loss that will have some implications on WKU’s bowl hopes months from now, but the Toppers still have nine games left this year — plenty of time to right the ship.

WKU (1-2, 0-1 Sun Belt Conference) had enough talent to beat the Jaguars over the weekend, but the Toppers let the game get away from them through dropped passes, poor run defense and about a hundred other issues.

Coach Bobby Petrino didn’t sugar-coat it after the game — after the 31-24 loss to South Alabama, in just its second year as an FBS member, the Toppers have a lot of work to do.

Consistency has been a problem for WKU this year. After starting the season with another win over Kentucky, the Toppers expectedly struggled against Tennessee before sputtering through the game against the Jaguars.

The Toppers have had issues staying consistent from one half to the next, as well. After mustering three points in the second half against the Volunteers, Saturday the Toppers could only put three on the board in the last 30 minutes again — all while the South Alabama whittled away at WKU’s 21-10 halftime lead.

But remember, we’re just a fourth of the way through the regular season. It’s hard to tell what’s true and what’s false with any team at this point.

Last season through three games, WKU was coming off of its first win over Kentucky and first win over an SEC school — at 2-1, the sky was the limit for that team. The Toppers finished the season 7-6 and went 2-5 in the last seven games.

WKU dropped the third game of the season back in 2011 as well in a major upset loss to FCS school Indiana State. After an 0-3 start, that team overachieved to finish 7-5.

“We know we’ve got to go to work. We know what we’ve got in front of us,” senior linebacker Chuck Franks said at Monday’s press conference. “The season is still young. We’ve still got a lot more ballgames to play. RIght now, we’re just focused on this next game and getting this win.”

If there’s any positives WKU can take from the 31-24 weekend loss in Mobile, at least the team’s expectations have been tempered a little bit.

The Toppers won’t have to deal with anyone in the national or local media predicting an undefeated season in the Sun Belt or an upset berth to a BCS bowl any more. Those expectations were put on the team when WKU hired Bobby Petrino, but remember, this is a group that went 4-4 in the Sun Belt last year. Expecting that much improvement in one offseason was unfair.

One loss isn’t going to define the entire season as a failure. The Toppers just have to work moving forward to make sure bad losses don’t become a trend.