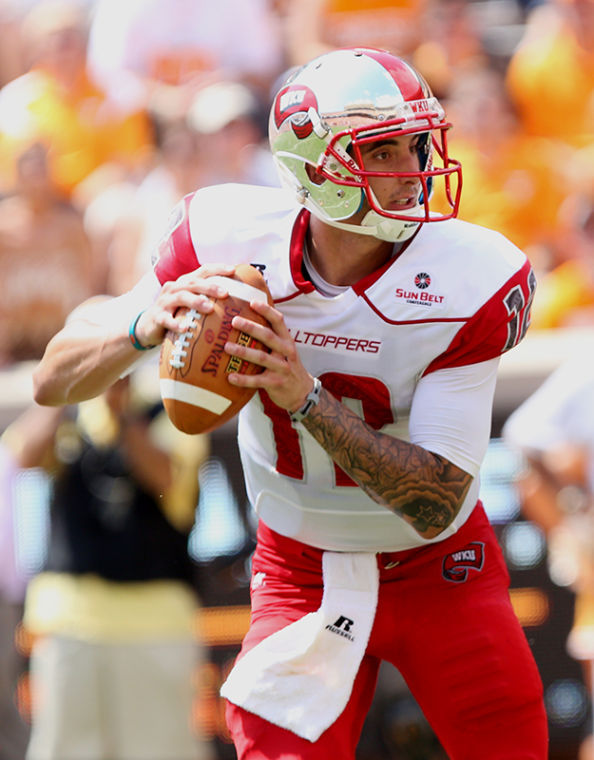 Anything short of a Sun Belt Conference championship would be considered a disappointment for coach Bobby Petrino and the WKU football team — the Toppers are one of the league’s frontrunners this season.

Their road to that desired position begins Saturday when WKU (1-1) begins conference play at South Alabama (1-1) for a 6:30 p.m. kickoff.

If the Toppers are going to have any shot of knocking off the Jaguars, the turnover ratio will have to sway more towards their favor.

The turnover statistics are in no way a proud number for the Hilltoppers. WKU ranks second to last in NCAA Division I-A in turnover margin (minus-7) through two weeks of play.

Five of the seven turnovers came off the throws of junior quarterback Brandon Doughty, who admitted he “lost some sleep” over that week two disaster at Tennessee.

The team’s woes have potentially opened the door for other players to earn minutes on the field, according to Petrino. The coach said players who “give the best effort in practice” will play in the game.

“It’s been very, very competitive,” Petrino said of the team’s week of practice. “We’ve opened up a number of spots for competition throughout the week for practice. It’ll be interesting to see how that all plays out.

The coach also said taking care of the football is once again going to be the deciding factor in the game’s outcome.

“The guys have paid great attention to the details,” Petrino said. “We’ve had our gauntlet drills and our proper carrying drills, so now it’s just about going out and doing it in the game. We need to take care of the ball to win the game.”

Petrino noted that playing seven conference games in the Sun Belt doesn’t give WKU much room for error this year and that it’s important to win every single game.

“Our players understand what’s at stake,” Petrino said. “We don’t have a lot of conference games, so you have to win every one of them and we need to get back on track.

“They’ve focused and they’ve practiced hard and they’ve done a good job in the meetings. I think we have a good plan. We have to get better from now until kickoff with our focus and our understanding of the game plan and then go out and play.”

Part of that game plan for WKU is to understand that the South Alabama defense is going to attack Doughty from all over the field. The quarterback said earlier in the week that the team is ready to put the turnover troubles behind them and prepare to make big plays Saturday in Mobile.