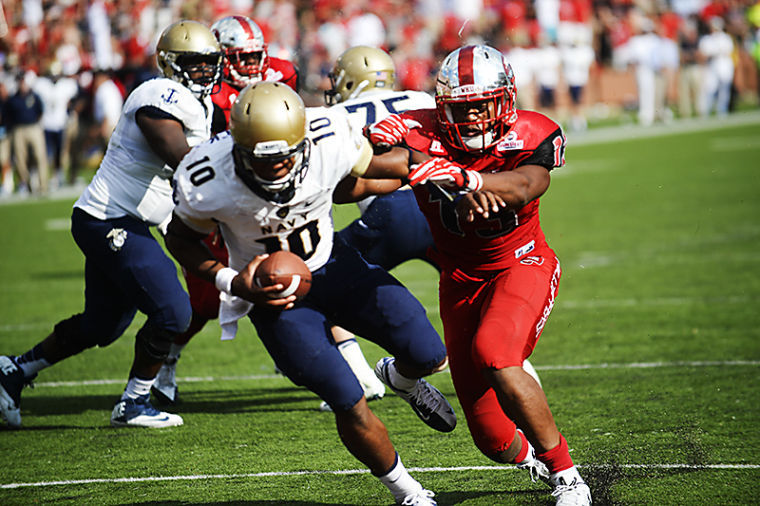 Antonio Andrews picked up right where he left off Saturday by single handedly out rushing the triple-option threat of Navy in WKU’s 19-7 win Saturday afternoon.

The junior running back outrushed the nation’s No. 1 rushing offense by himself with 32 carries for 182 rushing yards and two touchdowns while the Midshipmen only mustered 107 yards on the ground.

Junior quarterback Brandon Doughty earned the starting job and efficiently managed the offense that showed a strong balance of rushing and passing. Doughty finished having completed 25-of-31 passes for 198 yards and one interception to help the WKU offense put up 417 total yards on the afternoon.

Coach Bobby Petrino said he would have like to have seen more points put on the board, but they “did what they had to do to win the game.”

“Antonio Andrews really did a great job of running and breaking tackles,” Petrino said. “I thought our offensive line really wore them down…Brandon was real efficient, did a nice job with his reads and did a nice job delivering the ball.”

The offense did their part, but the defense may have done a little more.

The WKU defense held the opponent to just seven points, its best performance since holding Florida International to six points in 2012.

Petrino and his coaches have dedicated time since the spring to working on defending the triple-option threat that Navy poses.

WKU opened the game on offense for the fifth time in as many games, but the result was much different. The Toppers went three-and-out for the first time this season on the opening drive. Navy made the triple-option look easy on the first drive with 10 plays on 67 yards capped by a Keenan Reynolds one-yard touchdown run.

The Topper defense stood its ground against Navy in dominating fashion. The Navy offense sputtered after Reynolds left the game in the second quarter due to injury and was replaced by John Hendrick who led the Midshipmen to only 183 yards on the game.

That was the only time Navy would find the end zone.

Senior linebacker Andrew Jackson, who finished second on the team in tackles (7) behind senior linebacker Xavius Boyd (8), said the team was as prepared as they would ever be going into Saturday’s game.

“The coaches put in the plan and they told us if we go out there and execute it we’ll go out there and win,” Jackson said. “In the first quarter we came out there lackadaisical and we just had to get it right.”

For a defense that has given up an average of 383 yards per game, this wasn’t a statement game according to junior safety Jonathan Dowling, it was “just another win for the Tops.”

Dowling, who led the team last season in interceptions with six, grabbed two picks and four tackles against Navy.

“It was a good feeling getting back on the pick board,” Dowling said. “Everybody made their plays.”

The Toppers put the nail in the coffin when Xavius Boyd sacked Hendrick in the end zone late in the fourth quarter to give WKU its second safety in as many games.

Defensive coordinator Nick Holt said once the team got comfortable as the game went on, resulting in a dominating performance.”

“I’m very proud. They did a great job,” Holt said. “They executed and had good energy. They did everything we asked them to do in the game plan, plus some. They were having fun out there. I’m proud of those kids.”