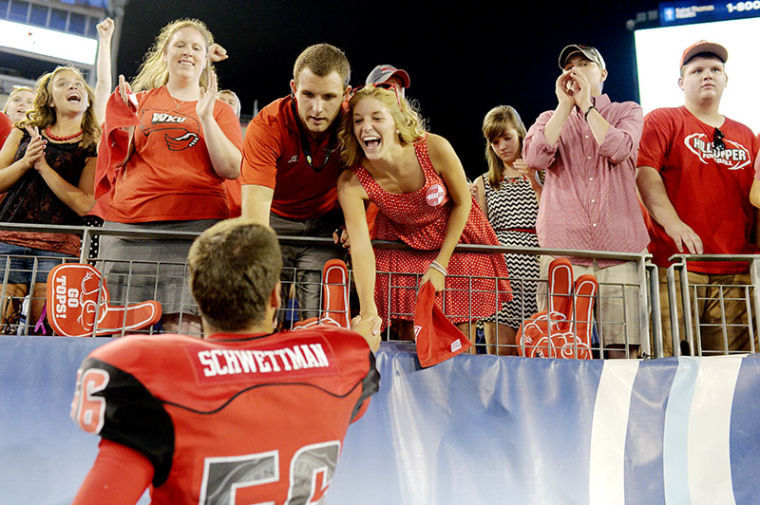 Athletics director Todd Stewart looked at a small crowd at Smith Stadium two days after Thanksgiving last year during WKU’s final game against North Texas. With so many bowl game implications riding on the team’s final Sun Belt Conference game, Stewart was unhappy in the attendance he saw that afternoon.

The final count per the NCAA was 10,117 fans in attendance — one of the smallest crowds to watch a WKU football game in recent memory.

The Toppers won the game against the Mean Green and finished 7-5, earning a place in the Little Caesar’s Pizza Bowl in Detroit a month later.

“It was really disappointing because we really had a lot at stake that day,” Stewart said. “We weren’t assured a bowl bid if we won, but we were sure that we weren’t going to a bowl if we lost. We needed to win that game because there were other bowl eligible teams battling to get to a bowl game.”

Last year’s bowl bid and the hiring of coach Bobby Petrino have expectations set at a new level.

Junior safety Jonathan Dowling said he has respect for the fans that did show up but in the end, the team has to do their job regardless of the occupancy in the bleachers.

“I support and I appreciate any fans that come out and support us,” Dowling said. “But at the end of the day we still have to handle our business as a team.”

The response so far is overwhelmingly greater than what was seen on that cold Saturday afternoon in November.

Season ticket sales are higher than they have ever been, but Stewart said they won’t have final season ticket numbers until after the game versus Navy Sept. 28.

“We actually sell season tickets up through the Navy game,” Stewart said. “But I would expect once we get to the Navy game we’ll have an all-time high, which would be in that 8,500-8,600 range. The most we’ve ever sold from back in 2008.”

But Stewart said the season ticket numbers don’t serve as a true definition for what the crowd will really be like this season.

That idea has prompted the athletics department to start the social media movement “#TOP7472” wanting students to break the student attendance record of 7,472.

One action taken last year to attract the students of age that could enhance the game experience at Smith Stadium was the selling of beer during the game. Only two beers can be bought at one time and fans signed up to be designated drivers receive complimentary non-alcoholic beverages.

“We had less than five alcohol related arrests the entire season,” Stewart said. “We didn’t have any incidents inside the stadium at all. There was no increase in alcohol related incidents or arrests at all from the year prior to last year.”

Either way, Dowling said the Toppers are finally ready to play in their own stadium after opening up with three games outside of Bowling Green.

“Everybody’s just finally ready to have all our fans to be able to come, everybody we know in Bowling Green,” Dowling said. “Even though we had the game in Nashville, I’m pretty sure that everybody that wanted to come wasn’t able to make it. It’ll be nice to finally play in front of all our fans.”