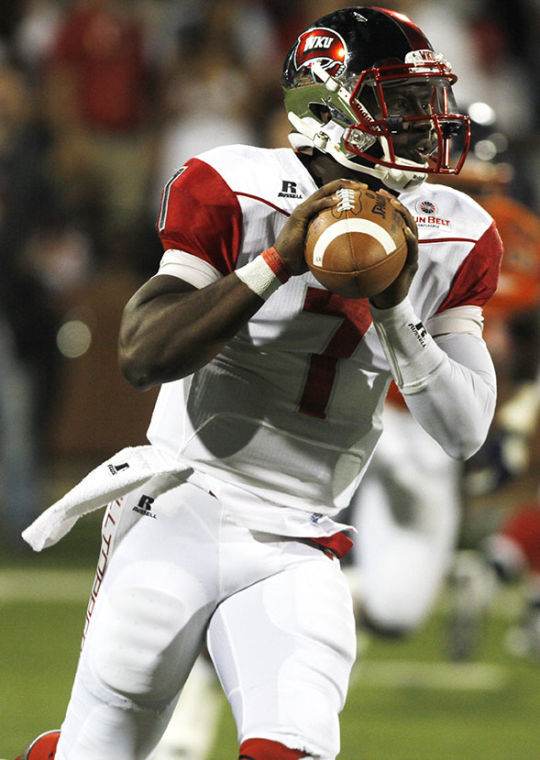 The quarterback is usually generalized as the leader of the offense. He lines up under center and barks signals to direct the offense according to what he reads in an opposing defense.

After four games this season, WKU is unsure of who is taking that leadership role.

It was junior Brandon Doughty for the first three games of the year, but an offense that failed to produce consistent results for a whole 60 minutes of football led the coaches to open the door for potential change at that leader spot.

Against Morgan State, all four quarterbacks saw time on the field for the coaches to evaluate who they believe will be the best solution to lead the team going forward.

While the quarterback role in particular is up in the air, there are other leaders on the team that fill the head role.

“I think we have some leaders at other positions right now,” offensive coordinator Jeff Brohm said. “We have Luis Polanco on the O-line and Cam Clemmons who have a lot of experience. Sean Conway has a lot of experience. Antonio Andrews at the running back position. And you got some tight ends, Mitchell Henry, that have experience.”

While the coach can name off several players that come to mind as leaders on the team, he didn’t shy away from the fact that the quarterback is one of the team’s most important leaders.

After all, Brohm knows a few things about quarterback leadership. He backed up Hall of Fame quarterback Steve Young for a portion of his five-year career in the National Football League and while in the XFL in 2001, he was named first team All-XFL, owning the leagues highest quarterback rating at 99.9.

Brohm is currently looking for the Topper quarterbacks — junior Brandon Doughty, redshirt freshman Damarcus Smith, sophomore Nelson Fishback and freshman Todd Porter — to step into that leadership role smoothly. But question now remains of who will earn the job when WKU takes the field against Navy on Saturday.

“I think all the quarterbacks know that there’s competition,” Brohm said. “At any time we could use any one of them. They’re working hard to get better at not only what they do well, but also what they don’t do well and I think they have to just come in and do what they do best, take care of the ball and lead us on touchdowns.”

Brohm and coach Bobby Petrino want to work the offense around their strengths. Petrino said each quarterback brings a different skill set to the table, and now the worry lies on which quarterback can operate best with the offense already implemented.

“I did really think that it was good for our football team,” Petrino said on all QBs playing against Morgan State. “I thought it was good for our quarterbacks and our youth at the position and us trying to learn more about how we operate our offense. I think the thing we really learned as a staff is you play to your strengths, which is our running backs and our O-line and our ability to run the ball and get it to guys that can make plays.”

As to who will start at quarterback against Navy Saturday, no one knows. Petrino said in his weekly teleconference that he will evaluate things once again and make the decision that best suites the offense.

“We’re going to go into practice and let them compete and work hard in practice,” Petrino said. “I thought all four of them did some good things, but obviously they have a lot of work to do and a lot of areas they can improve upon.”