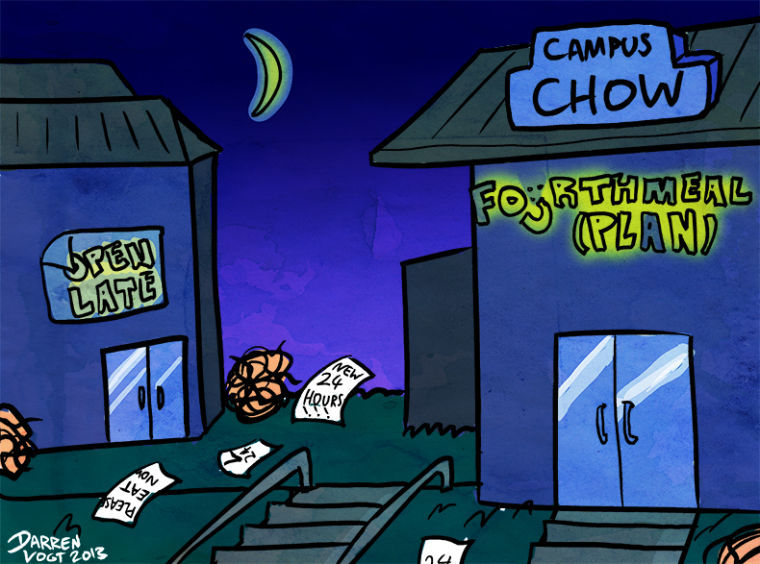 THE ISSUE: When the Student Government Association meets tonight, it will vote on a resolution to establish a 24-hour dining option on campus. If the resolution passes, it will be given to Gary Meszaros, assistant vice president for Auxiliary Services, for consideration.

OUR STANCE: The idea of a 24-hour dining option for students on campus seems great. However, the reality of such a restaurant doesn’t because of the likelihood of increased prices and lower food quality.

You’ve got another 250 pages to read before your class at 8 a.m., but you’ve got ice in your veins. You know you’re going to ace this exam if you cram hard enough.

The only thing that stands between you and sweet success is the small hunger pangs that are slowly taking over your mind as morning nears.

You stare around your dorm room, disgusted by the pretzel rods and peanut butter crackers your mom sent in the care package last week.

That’s when it hits you: there should be a restaurant on campus that’s open at this time.

We’ve all had the idea at some point.

Well, the SGA has heard your cries, late-night wanderers of WKU.

But if that sounds too good to be true, that’s probably because it is.

The Herald is perfectly aware that most college students love and cherish late-night dining. It seems like the union between this beloved pastime and on-campus dining would be a match made in greasy heaven.

But the Herald doesn’t believe the allure of a 24-hour dining option to be worth the obvious drawbacks.

Much of this has to do with the nature of late-night dining and the infrequency with which customers visit such an establishment.

First, the quality of food would be lower than what currently exists at WKU, Mezaros previously told the Herald.

Because customers cannot be relied upon to frequent such a restaurant like they do Fresh Food Company in the daytime, whatever food is served at this venue would likely sit under a heat lamp of sorts until some bold student decides to take a chance.

Second, the cost of the food would be high because of all the extra workers that would need to be hired to staff such a restaurant, Mezaros said.

Third, the dining option would serve a very small percentage of WKU students.

While on-campus students are the ones being targeted for this restaurant, a lot of WKU students don’t live on campus.

And of the ones that do, there are already 24-hour dining options within walking distance of their rooms that are likely going to be better than whatever this resolution would create.

Yes, we know that if it’s already late at night, and you’re tired from studying — because that’s the only reason that college kids stay up late — the last thing you want to do is walk the street with no sidewalk to Waffle House.

But you needed to work off those hash browns anyway, right?