Times in the Trenches: Linemen Conway and Polanco have seen it all 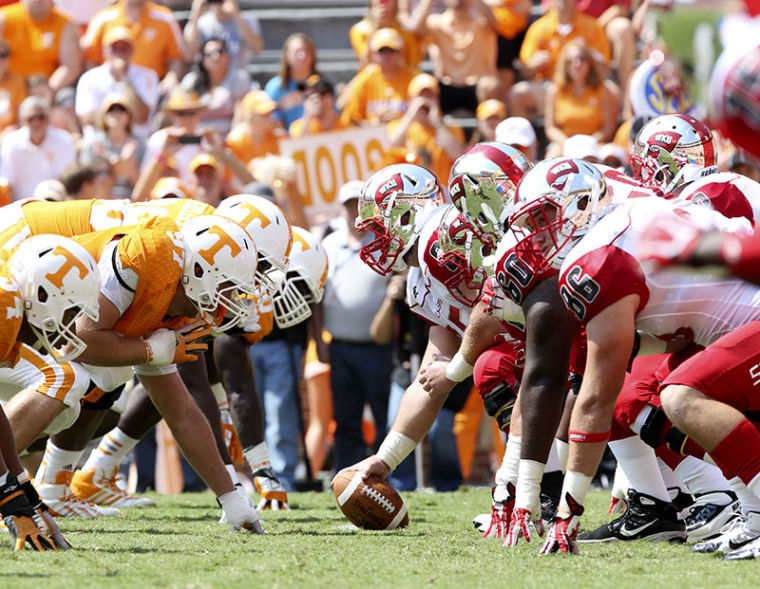 Senior center Sean Conway (65) prepares to snap the ball during WKU's 52-20 loss to Tennessee on Sept. 7.

Husky, rugged, tough, filthy, vicious — all are words eligible of defining the unsung heroes in football.

On a chalkboard of x’s and o’s, their job isn’t connected with zigzagged arrows or dotted lines. They don’t have to decode a hitch route or a post pattern 15 yards out from a barking quarterback during a two-minute drill.

Their circles on the board stay rooted with one job in mind — protect the assets.

The assets are the ones making newspaper headlines, choreographing touchdown dances, and stealing the autographs and the spotlight for the rewards on SportsCenter Top 10.

They’re the anchors that hold the ship. Without these lumberjacks, there are no headlines, no touchdowns, and no spotlights.

The offensive line hold one of the most important jobs on a football team and endure more battles and rough patches than any other position on the field. They’ve seen it all in the trenches – from fingers in the eyes at the bottom of a dog pile to the holding calls a referee never sees.

Two linemen for WKU have seen everything in their expiring time on the Hill.

Redshirt seniors Sean Conway, a center, and Luis Polanco, WKU’s starting left guard, have been through the whirlwind of Topper football over the last five years.

The two were redshirted in 2009 when former coach David Elson and the Toppers went 0-12 in their first year of Division I-A football. Since that winless year, Conway has been on the field for every snap of every game since 2010, making Saturday’s game against Morgan State the senior’s 41st consecutive start for WKU.

Polanco has seen plenty of playing time as well. The lineman from Tampa, Fla. started all but one game last season and has seen action in all but three games in his college career.

Needless to say, the two have had time to formulate a tight chemistry with one another.

“I think throughout the years we have become tighter. We know each other better,” Polanco said. “We kind of know what to expect from each other, blocking for each other, having each other’s back.”

As the senior leaders on the offensive line, it’s their responsibility to make sure the younger guys are in check. After all, their resume shows they know how to work the trenches unlike any other group.

The two linemen are responsible for helping pave the way for two of WKU’s greatest rushing performances in the past two years. In 2011, the team rushed for a Sun Belt Conference-best 181 yards per game behind running back Bobby Rainey, who set the record for most rushing yards in a single season with 1,695 yards.

They bulldozed for even more last year, clearing the path for Antonio Andrews to eclipse Rainey’s landmark by 33 yards at 1,728 yards.

Being the leaders on the field in the past have earned the two men a healthy combination of preseason accolades from many sporting publications — Conway is on the watch list for the Rimington Trophy, awarded to the nation’s top center.

For Conway, starting every game in his time on the Hill is a feat he hasn’t given much thought to. It’s just a part of his life now.

“It’s been fun. A lot of good times, a lot of ups and downs,” Conway said. “Football teaches you about life. Different head coaches, you get different perspectives in different things throughout the organization and it’s been fun.”

When Conway was a senior at Father Ryan High School in Nashville, Tenn. he received offers from WKU and rival Middle Tennessee. When he chose WKU, the team was making its transition to Division I-A, and Conway wanted to be a part of something big.

“Back in ’09, I thought they had all the facilities,” Conway said. “They were getting the right coaches and the right players and I wanted to be a part of that.”

With Polanco being one of those players, the two have grown to become a tight fit. The men at one point found themselves at a position battle for center, but now that they’re in the final leg of their long journey they depend on each other to protect the assets.

“We have gotten to know each other better and better as the years go by,” Polanco said. “We came in together, at one point we kind of went for the center position at one time so that brought us together, too, with the competition. So now playing next to each other, we know what to expect from each other.”

The values Conway and Polanco hold for themselves are the same ones they hold the younger linemen up to as well.

“I’m all about the team,” Conway said. “I’m not worried about me right now. I want to win the Sun Belt and I want to go to a bowl game.”

Being all about the team is the job of the offensive line. It’s their duty to anchor the offense, protect the quarterback and his blind side, come off the snap with furious, malicious intensity that strikes fear into the opposition.

They understand it’s not about them. It’s about protecting the team, being selfless, and having each other’s back.