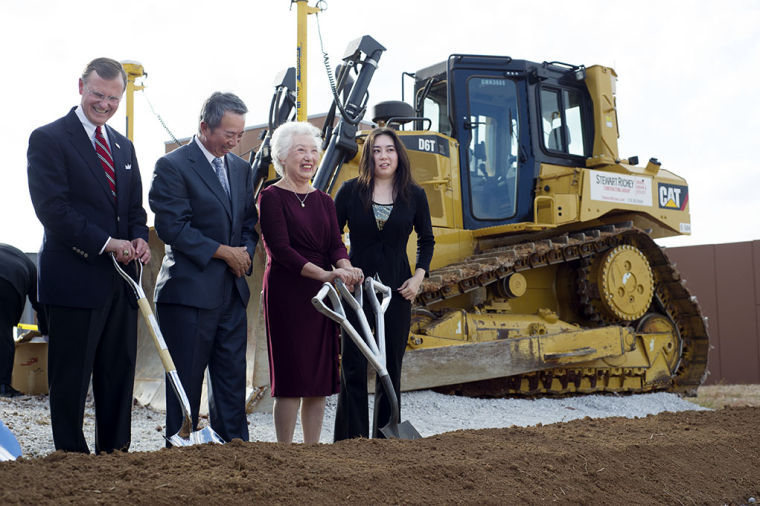 President Gary Ransdell prepares to break ground with Ray Chen & Family, owners of Wellspring Investment, for the Hyatt Place that will be located behind the Alumni Center of WKU, September 17, 2013. Justin Gilliland/HERALD

Visitors to Bowling Green will have a new place to stay next year — one that is much closer to campus.

On Tuesday, among a large crowd of people from the WKU Administration and Bowling Green political officials, Douglas Artusio, Chairman and CEO of Dellisart LLC, announced the construction of a Hyatt Place hotel adjacent to the Augenstein Alumni Center during a groundbreaking ceremony.

Construction on the hotel will begin this fall and is slated to open in fall 2014.

Artusio said the project consisted of cooperation, dedication and determination from the community in order to become a reality.

“It’s been a vision and hope for many people for quite some time,” Artusio said.

The hotel will contain 108 rooms and will be four stories tall. It will also contain an indoor pool and a fitness room, according to blueprints.

The hotel will be owned by Dellisart Wellspring LLC, a partnership comprised of Wellspring Investment LLC and Dellisart LLC.

Both companies are involved in hotel management and own and manage the Staybridge Suites in Bowling Green next to the Carroll Knicely Conference Center on South Campus.

Dellisart Wellspring LLC has executed a letter of commitment from US Bank and is scheduled for a loan closing in the upcoming weeks.

Artusio said the reason why the Hyatt Place brand was chosen was because it would “do justice” to the Bowling Green community.

“Bowling Green is not your average city,” Artusio said. “It performs so well. The people are genuinely nice. It has good, simple attitudes.”

The hotel is a part of the Tax Increment Financing District, an area used to develop and revitalize downtown Bowling Green.

President Gary Ransdell said the hotel is the cornerstone of the TIF district.

“This is what begins to marry Western Kentucky University, our physical campus, with downtown Bowling Green,” Ransdell said. “This project is going to be the bridge which begins to bring these two very important variables in our community together.”

Doug Gorman, Chairman of the Warren County Downtown Economic Development Authority, said the reason to build a hotel, as opposed to other attractions, was because it would entice more people to stay in the downtown area.

“We want to make downtown a place where people can live, work and play,” Gorman said. “And the thing that’s been missing in the downtown has been a hotel.”

Ransdell said WKU doesn’t have a financial stake in the project, but a major financial implication. Ransdell said the hotel will generate TIF revenue for WKU which will aid in payment for activities WKU does within the TIF district.

“This is the bridge, the connector, between the campus and downtown that is the game changer for both our community and our campus,” Ransdell said.

Following the announcement, a groundbreaking ceremony and a reception took place.