WKU earns win No. 300 in tournament at Diddle Arena 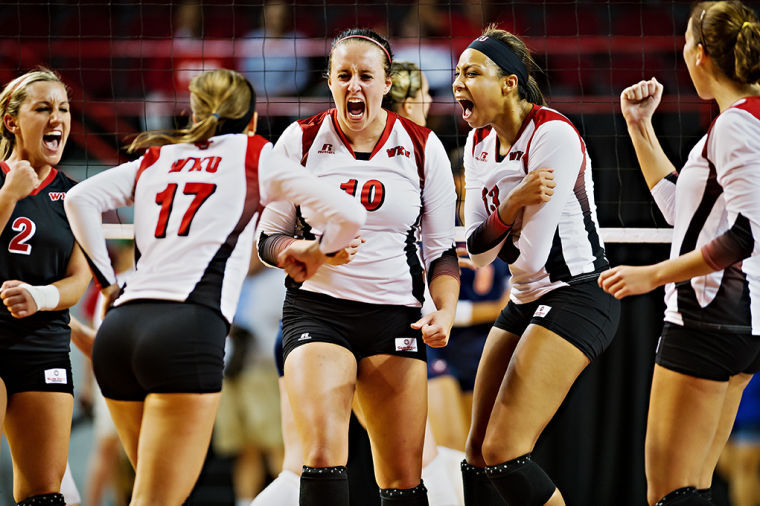 Emotions run high as WKU begins their comeback in game one of their game against Virginia during the WKU invitational tournament on Friday, September 13, 2013. From left is Ashley Potts, Kaelin Grimes, Haley Bodway, Noelle Langenkamp, and Melanie Stutsman. WKU would go on to win the match-up 3-1.

The Lady Toppers hit another milestone this weekend when they earned the 300th win in school history during a 2-1 run at the WKU Invitational.

WKU (7-4) topped Virginia 3-1 in the first game and swept University of Nevada, Las Vegas in the final game to earn the two wins needed to reach the milestone but fell to Ohio in straight sets in the second game.

“I’m so proud of what our program has grown into and the atmosphere that’s been created by our fan base, band and students, and I hope to see it continue in the right direction.”

It was WKU’s last home action of September. The Lady Toppers will not play in Diddle Arena again until Oct. 4.

Joining the two WKU athletes were Mallory Woolridge of Virginia, Madeline Westman from UNLV, and Liis Kullerkann of the Ohio Bobcats. Katie Horton, also from Ohio, was named the MVP.

Boyan recorded 30 kills during the three games while Langenkamp had 33 to lead the Lady Toppers.

Ohio went 3-0 this weekend to claim first place in the tournament and only dropped two sets in the three matches.

Hudson said the team gave great effort throughout the weekend, but there are things to improve on and he and his team need to do better.

“We’re just too up and down right now with things we’re doing,” Hudson said. “I’m really, really proud of our kids. They played exceptionally hard tonight and they needed to.

For Boyan, serving is one aspect of the game that could be cleaned up as the team heads forward.

“We just need to be more aggressive with serving,” she said. “Our defense too — both blocking and floor defense could use some work. I think if we work on that and just keep playing as hard as we did this weekend then we’ll be good for next weekend.”

Defense played a factor in the team’s lone loss to Ohio on the weekend.

In the loss, WKU only recorded two total team blocks, both of which came in the last set compared to the nine blocks tallied by the Bobcats. In the next match against UNLV, the defense came alive to get 10 blocks in the game.

Each game throughout the course of the weekend was a close one for the home team. All 10 sets that WKU played in the tournament were decided by seven points or less, and in the first game of the tournament, it took a 9-1 run to end the first set to give the Lady Toppers the victory.

Hudson called it a “gutty” win and chalked it up to experience. For senior outside hitter Paige Wessel, it was just all about not giving up.

The Lady Toppers will play in another tournament next weekend as they travel to Dayton, Ohio, for the Flyer Classic. The next home match for WKU will be Oct. 4 as they take on Texas State in a Sun Belt Conference match.