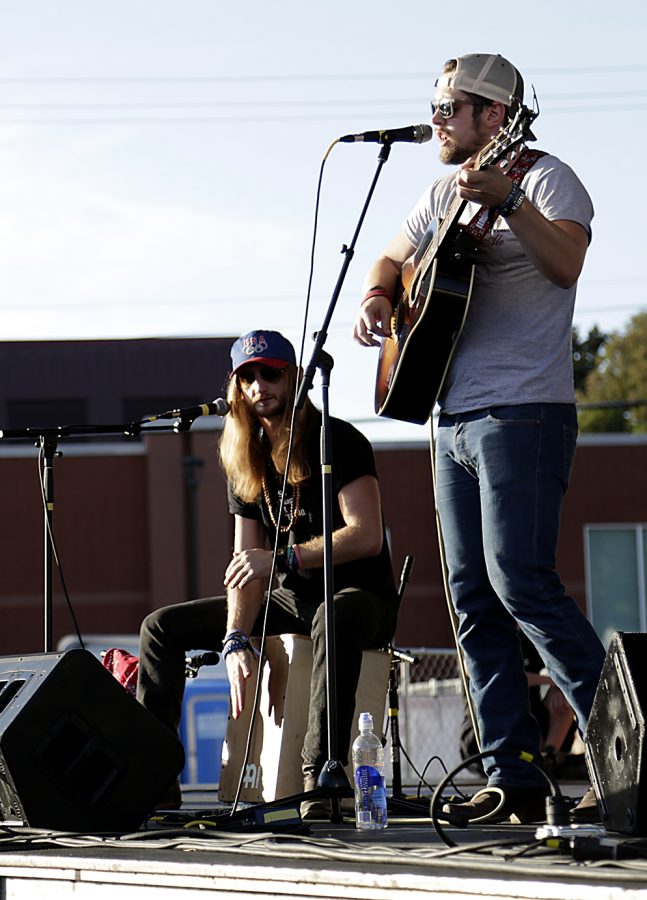 Local Kentucky band Sundy Best put gave a concert along with eleven other bands to help raise money for The Center for Courageous Kids in Circus Square Park in Bowling Green on September 14, 2013.

Thousands of music fans converged at Circus Square Park Saturday for the Lost River Music Fest. The 12-hour event featured 13 bands on two stages and nearly a dozen vendors with proceeds going to the Center for Courageous Kids, a free camp in Scottsville for children with medical challenges.

Festival organizer Keith Coffman estimated 3,000 people were on hand throughout the day at the festival.

Prestonsburg duo, Sundy Best, comprised of childhood friends Nick Jamerson and Kris Bentley, drew one of the largest and most raucous crowds of the day for their set.

The group was formed in 2010 but recently found their way into the spotlight in the country music world when their video, “Home,” debuted at number one on CMT’s 12-Pack Countdown in April.

Jamerson, lead singer and guitarist for the group, said he is still wrapping his head around the experience.

Sundy Best has garnered a loyal following on social media, and the duo affectionately refers to their fans as kinfolk.

Bentley said he prefers calling fans kinfolk because it pays homage to the tight-knit community they grew up around in eastern Kentucky.

The band’s “kinfolk” are an integral part of their success.

Sundy Best’s video for their song, “Lily,” also debuted at number one on CMT’s 12-Pack Countdown. The voting for these video contests is purely driven by fan voting, and Jamerson said the loyal support the group has received is unlike anything else in country music right now.

“It’s pretty unreal how everybody is so devoted and pushes everything,” he said. “I feel like we’ve got something that no one else does. It’s pretty special.”

The duo has parlayed their success from having videos on CMT into attending the CMT Music Awards as well as performing at the CMT Music Festival in June. Sundy Best released their first album, “Door Without A Screen,” on Aug. 27 and has plans to release their follow-up effort in January.

In the meantime, Bentley said the duo is going to focus on playing as many venues in Kentucky as possible.

“There are still a lot of people in the state that don’t know about us,” he said. “We’re trying to build that up as big as we can because we are releasing a new record in January.”

Bentley said the Commonwealth, especially eastern Kentucky where duo grew up, is one of Sundy Best’s biggest inspirations.

“We’re very Kentucky proud,” he said. “If you listen to our record, it’s pretty evident. It’s what we know, and what we know is what we write about.”

Jamerson said his Kentucky kinfolk have been there from the band’s beginnings, and he plans to do everything in his power to keep them proud.

“We want to carry that flag for Kentucky,” he said. “The only people that gave a damn from the beginning were people from Kentucky. Why not give them something to be proud of and to share with other people?”