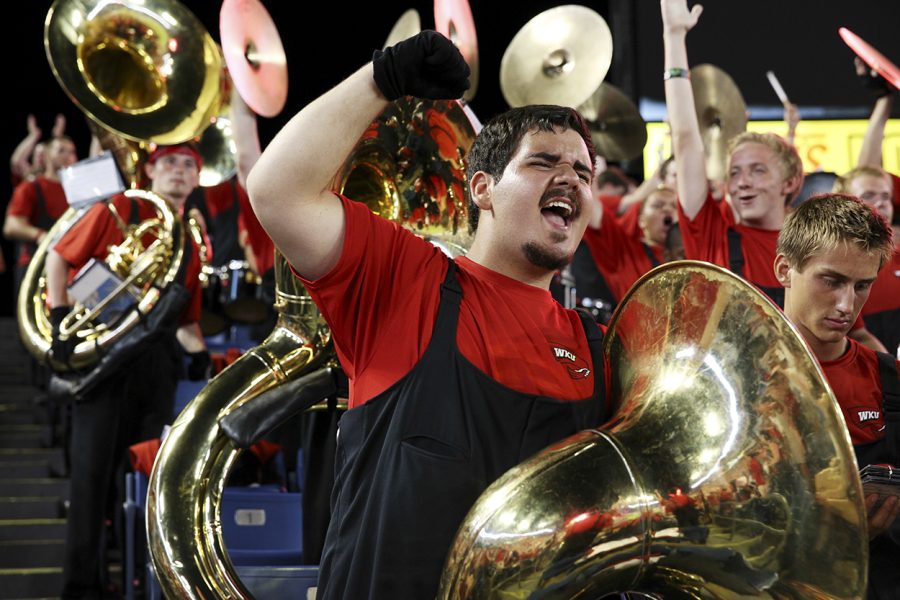 Doubling in numbers in the past five years, WKU’s marching band isn’t planning on slowing down any time soon.

Gary Schallert, director of bands at WKU, said the band has increased steadily in the past five years.

“The biggest thing that we’re excited about is the growth of the group,” he said.

Since fall 2008, 118 students have enrolled in the Big Red Marching Band, bringing the total number of students involved to more than 230 for this semester.

“I think we have the second or third largest band in the state,” Schallert said, adding that a typical college band is between 250 and 300 people.

“We’re pretty excited about that with the size of the university,” he said.

The band isn’t only for music majors, either.

“Most of the people in the band are non-music majors, and last year, we had 60 different majors in the band,” Schallert said. “Maybe they played in a band in high school and they wanted to continue on here for the social benefits and be a part of a big student organization, and I think they’ve enjoyed doing it.”

In terms of recruitment, the efforts of going to high schools and spreading the word around campus have paid off.

“We’re trying to recruit the best students, so I see more maturity in the group as far as ability level and so forth,” he said. “That’s going to translate to a better band, more entertaining shows and us being able to do a lot cooler things.”

Overall, Schallert has high hopes for the future of the band.

“Of course if we get to a bowl game with our team, that’s cool,” he said. “One of the goals we have is to get accepted to something like Macy’s Thanksgiving Day Parade. That would be a huge honor for us, so we’re gonna be putting together some materials to try and apply for that in a couple of years.”

Jeff Bright, associate director of bands, said the band’s attitude is the best of any band he’s been with in 15 years.

“They’ve been really excited to support the teams, and in addition to having a great attitude and work ethic, they’re so full of spirit for what’s going on on campus here,” Bright said.

He said attending the Macy’s parade is just one item on the list of accomplishments the band wants to meet.

“We’re hoping to produce a professional quality CD,” he said. “That’s something new and that we haven’t done before.”

Bright said the CD would be recorded around mid-November before going through an editing process. It’s planned to be released near the beginning of spring, he said.

“We’re hoping to get all our traditional songs like the fight song,” Bright said. “We hope to use it as a recruiting tool in public schools, but we’re also hoping to distribute to donors or alumni, or sell in the bookstore so people can have recordings.”

Madisonville senior Adam Almon has played the trumpet all four years he’s been at WKU.

“I wouldn’t know anybody here at Western if I hadn’t joined band,” Almon said. “It’s taken me to Arkansas, it’s taken me to Detroit… all across the country just being in band.”

As for his section, Almon said it’s the biggest it’s ever been.

A marketing major and music minor, Almon hopes to work within the music industry.

“I’m going to try to do something in the music industry like working with a label in Nashville or something,” he said.

Flaherty senior Andy Edelen has played the snare drum since high school and has continued to play during his time here at WKU.

“I wouldn’t be doing it for five years if I wasn’t having fun,” Edelen said.

Majoring in music education, it was required for him to join the band for two years.

Edelen said being in the band has given him valuable experience for his future career.

“I’ll probably be a band director when I graduate,” he said. “I start student teaching in the spring.”

Edelen said the past two years, he has had the chance to write the music for the band’s drum-line, which has helped his growth in music.

“It’s kind of trial and error,” he said. “I see what works with the band and what doesn’t work. It’s really just for personal growth.”

Although there aren’t awards and competitions for college bands, Schallert said playing in the band is still rewarding.

“At this level, it should be about supporting your team and university and helping to create spirit,” Schallert said. “We need to dedicate our time to support things happening on campus.”