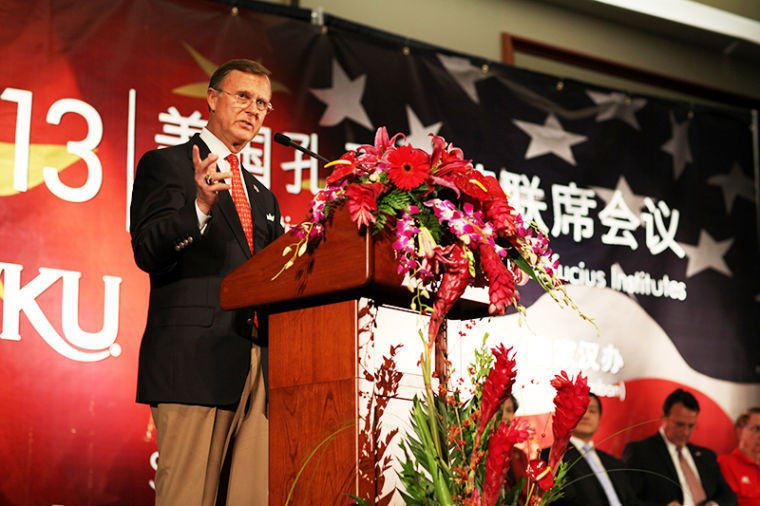 When walking through the entrance of Helm Library, it’s hard for students not to notice the Chinese art, artifacts and more along the walls and in nearby display cases.

That is just the reaction that President Gary Ransdell has wanted since the Confucius Institute opened on campus in April 2010.

“We want our students to walk through China on the way to the library,” Ransdell said.

More than three years since its opening, WKU’s Confucius Institute has grown to new heights, and was shown to institutes from all over the U.S. at a meeting that took place over the last few days.

More than 250 delegates representing more than 85 institutes were in attendance along with representatives of Hanban, the Chinese Ministry of Education that oversees the Confucius Institute program.

Visitors began the meeting by getting a tour of the new CI Mobile, which is a bus that WKU uses to spread the word about the Confucius Institute. They also got a tour of the Chinese Learning Center within Helm Library and participated in the coin toss before the football game against Navy.

The meeting officially kicked off with an opening ceremony at the Carroll Knicely Conference Center on Saturday evening, which featured a variety of speakers.

Ransdell opened the ceremony by discussing the ways in which WKU has grown and impacted others through the Confucius Institute. These included things such as the WKU Symphony’s recent trip to China, the increasing number of Hanban volunteer teachers in nearby counties, the ways that iMedia is incorporated with the institute, CI Mobile, and more.

Flynn shared what he called a “P-12 perspective” of the Confucius Institute in the Simpson County school system.

Flynn said their Confucius classroom affiliate was the first in Kentucky, and currently has four teachers working with 3,000 students.

The next speakers to take the stage were Kentucky state Reps. Jody Richards, D-Bowling Green, and Jim Decesare, R-Bowling Green.

They read a citation from the House of Representatives of the Commonwealth of Kentucky that read this was the “first meeting of this magnitude on American soil.”

Mayor Bruce Wilkerson and Warren County Judge-Executive Mike Buchanon spoke next. They discussed how Bowling Green has evolved from a somewhat homogenous community to one where the public schools teach in 41 different languages. They also read a proclamation on behalf of the city of Bowling Green and Warren County that declared Sept. 28, 2013, Confucius Institute Day.

Cooney spoke of how “The Economist” a year and a half ago described Confucius Institutes as “the most successful soft power application in recent decades.”

Sidney McPhee, President of Middle Tennessee State University, spoke next. He started off by sharing that China had literally changed his life and talked about his book of photographic essays, “China: Through The Eyes of An American University President.”

McPhee also shared a story about taking 40 Chinese students to the Grand Ole Opry and watching them clap and sing along while Lee Greenwood sang “God Bless the U.S.A.”

“That is what it’s all about,” McPhee said. “That is when you know you are making a difference in the lives of these young people.”

McPhee also shared a quote from Confucius that he felt related well to those involved with the institutes and the challenges that may come along with them:

“It does not matter how slowly you go as long as you do not stop.”

The final speaker and highlight of the Opening Ceremony was Madame Xu Lin, Director General of Hanban and Chief Executive of Confucius Headquarters.

Ransdell introduced Lin by talking about how she attended her first American football game earlier that day and joined the Ransdells at their home for lunch.

Ransdell also told the story of how Lin had once applied to get her Master’s Degree here at WKU, but wasn’t offered enough scholarship money to be able to attend. However, Lin ended up being presented with an honorary WKU Doctorate in Beijing on July 22, 2011.

Lin’s speech discussed the significance of holding this meeting in Kentucky, featured excerpts from a letter from the President of China and shared how the U.S. has the most Confucius Institutes in the world and how she thinks that despite it being only three-years-old, WKU’s is at par with the best of them.

After Lin closed her speech, plaques were presented from Hanban to the three new Confucius Classrooms in Simpson, Barren and Warren counties.

The conference continued on Sunday with group discussions and meetings and held its closing ceremony on Monday morning.