Full steam ahead: WKU may be outgrowing itself 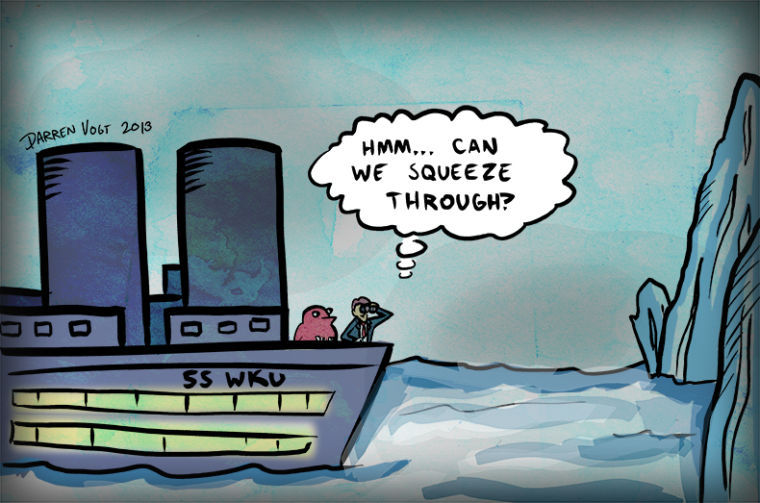 The Issue: WKU’s national profile has grown exponentially in the past few years. But this growth has come at some expense. This cost will continue for as long as WKU pushes forward with construction projects and growing its athletics department.

Our Stance: To its credit, WKU has been hugely successful at balancing its budget with its desire to grow its profile. As we wonder what WKU’s next move will be, the Herald hopes WKU does not expand beyond its means — passing that cost onto students.

We don’t want to get nostalgic here.

You won’t see any seniors wagging their fingers at freshmen, harassing them with stories about how “back in their day” as freshmen WKU was a lot better.

However, as is the case with most progress, the growth has met its share of obstacles. The football program may have sacrificed some integrity to be the one to offer head coach Bobby Petrino his second chance, and WKU definitely sacrificed $2.1 million this summer as it chugged along in its construction craze.

Admittedly, we at the Herald have openly questioned if all the construction and renovation is worth the cost.

As WKU faced the budget crisis this summer, we openly criticized the construction of the new Honors College and International Center and the Greek Housing Project.

However, due to clever financial footwork, WKU managed to find a solution in the numbers for the budget shortfalls and pressed on with construction without a single pay cut or layoff.

And this risk-reward storyline has been played out several times in the past few years.

Though we’re all still waiting to see how the Petrino hire turns out, does anyone remember when we questioned whether WKU could hack it as a Division I-A football program? WKU went 0-12 that first season.

But now the Hilltoppers are being featured on the cover of the sports section of USA Today as Bobby Petrino —who we believe to be a great hire, integrity aside — takes the helm of a team who just attended its first FBS bowl game. The team has even received so much hype that some news outlets claim it has a chance to go undefeated.

And don’t even get us started on basketball.

Though raising admission standards shrank the freshman class and would normally mean less tuition revenue, WKU practically made up the difference by the growing number of out-of-state and international students no doubt attracted to the expanding campus and blossoming athletics.

It seems like every year, WKU pushes the envelope just a little further, and somehow the student body walks away unscathed.

But we’re not proposing that WKU continue to spend money to make money.

What happens if the construction investments and higher-profile sports didn’t yield more out-of-state students this school year and WKU’s budget had taken a hit?

Sure, we understand that hypothetical situations mean nothing when President Gary Ransdell has already proven himself to be quite good at distinguishing if the risk will be worth the reward.

But what is the plan when financial footwork won’t cut it — when WKU either stops expanding or raises tuition to cover the expenses?

A Herald reporter asked Ransdell about the possibility of a raise in tuition to cover construction projects in May 2011 for an article on WKU’s debt concerns.

“We’ll do projects, but I don’t see projects coming out of tuition going forward,” he said.

So as we start a new semester, we want to acknowledge that this is a great time to be a Hilltopper.