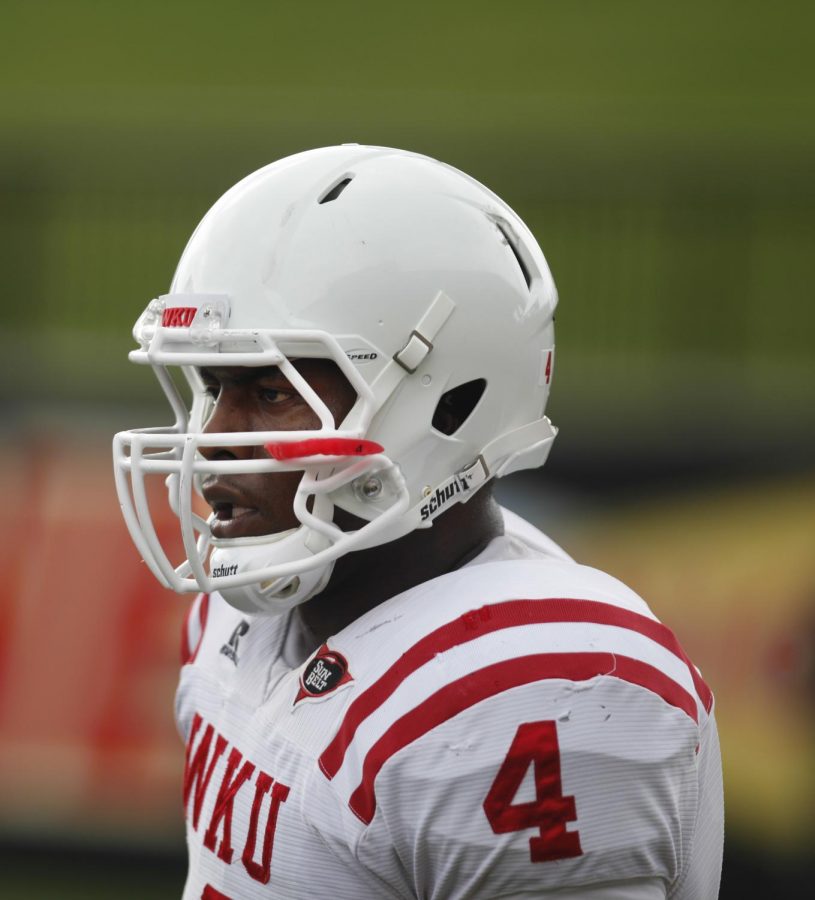 WKU’s leading tackler from the past two seasons hits hard on the field and talks big on the podium.

Senior middle linebacker Andrew Jackson has become the face of the WKU defense over the past two seasons. Since he stepped into the starting role in 2011, the 6-foot-1-inch senior has recorded 231 tackles and has been named to two consecutive All-Sun Belt Conference first teams.

Jackson, who recorded eight tackles against Kentucky in a winning effort last year, talks like a guy who knows he’s the most feared player on the field.

“I ain’t worried about UK — I don’t even care nothing about ‘em,” Jackson said about Kentucky, WKU’s first opponent this season, after practice on Wednesday. “We’re going to handle them Saturday, so y’all just be ready for that.”

Jackson could be the most important player on either side of the ball for WKU this season. He was elected to be a captain of the team during Fall Camp and is the anchor of a defense looking to replace its entire starting defensive line from a year ago.

Jackson will be joined on both sides by outside linebackers and fellow seniors Chuck Franks and Xavius Boyd.

Boyd, who joined Jackson in the starting lineup for much of last season, called it an honor playing next to the middle linebacker.

“He’s been here four years and he’s got great energy, always moving around,” Boyd said. “Playing against him, I know if I out-tackle him, I guess I’m one of the top linebackers in the nation — just like he is.”

Boyd isn’t sugarcoating it when he calls Jackson one of the best at his position in the NCAA — he has gained recognition from many scouts and analysts as one of the top linebacker NFL prospects in college football.

Jackson is so strong, he said he actually

had to lose 10 pounds of muscle this summer to get into playing shape.

“My weight, really, was kind of messing with me a little bit, but I worked all summer to get back down to like, 255, around that area for my pass coverage, so I’m ready for the season,” he said. “I was too big, really. I had muscle, but it was just too much, so I had to lean up a little bit and get right.”

Sun Belt opponents have taken notice of WKU’s man in the middle. The line- backer was recently named the preseason conference Defensive Player of the Year.

He might talk big — Jackson was famously caught on ESPN taunting Ken- tucky by saying “they supposed to be SEC” during the meeting between the two teams in 2011 — but his numbers speak for themselves.

Last season Jackson recorded 122 tackles — 39 more than WKU’s No. 2 tackler — with two sacks and four forced fumbles. Along with former defensive end Quanterus Smith, Jackson was the most important piece of a group that finished No. 1 in the Sun Belt Conference in total defense.

Now a captain elected by his teammates to lead the team, the Toppers are expecting Jackson to lead them off the field as well as on it.

Defensive coordinator Nick Holt said he needs Jackson to help set the tone for his defense this year.

“He practices well every day and continues to get better, which he has,” Holt said. “His habits have really improved. He’ll have the chance to maybe make a living at this game, but that’s way down the line. He needs to play really well against Kentucky.”

Luckily for Holt, Jackson sounds like he has every intention of having a career day on Saturday.

“They’ve got a new coach that’s going to try to come around with all the tricky, four-wide stuff, try to trick us up,” Jackson said. “But we’re just going to hit ‘em in the mouth and get it over with.”