Rush: Number of bids increases by 75 during Fall recruitment 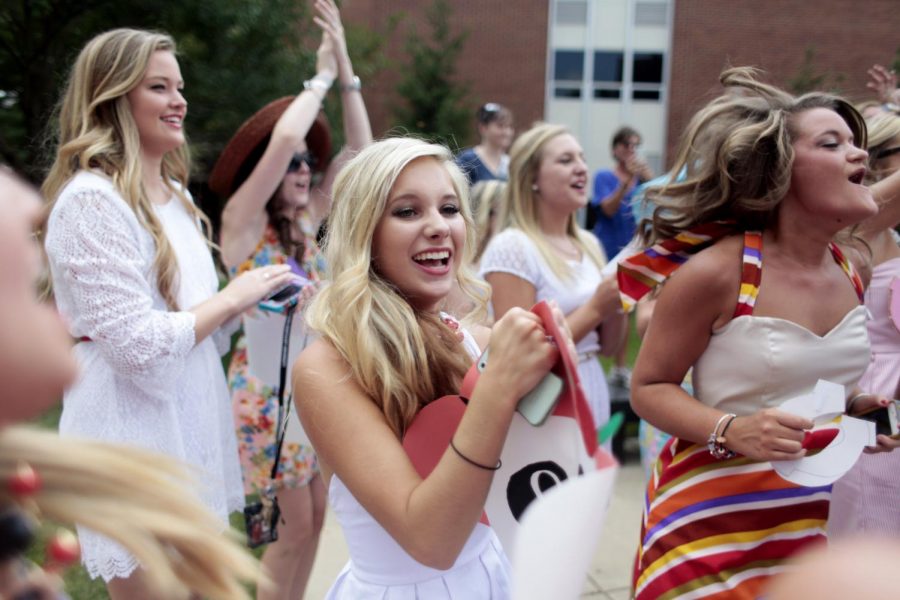 Nashville freshman Holly Reynolds (center), a new member of Alpha Omicron Pi, shouts her first chant with her new sorority in front of MMTH during Bid Day on Sunday, Aug. 25.

Fall sorority recruitment at WKU ended with the same cheering and chants that fill the Hill every year.

But this year, the cheering may have seemed louder.

Nashville freshman Holly Reynolds was one of the 360 recruits who rushed a sorority during the fall 2013 formal recruitment.

Reynolds knew from the first night, at “Meet the Greeks,” which sorority she wanted to join, Alpha Omicron Pi.

“Every girl I talked to at AOPi was really fun and energetic and like, as soon as I walked in the room there was so much energy and I already knew I belonged there,” Reynolds said. “And throughout the week, that never changed.”

“My second and third would change, but my first would never change.”

“All of the girls were great,” Threlkeld said. “Holly particularly stood out because she’s so cute and precious. But she loved the whole experience. She was excited from day one.”

Threlkeld said as a Pi Chi she didn’t try to guess which of the sororities the girls would end up joining.