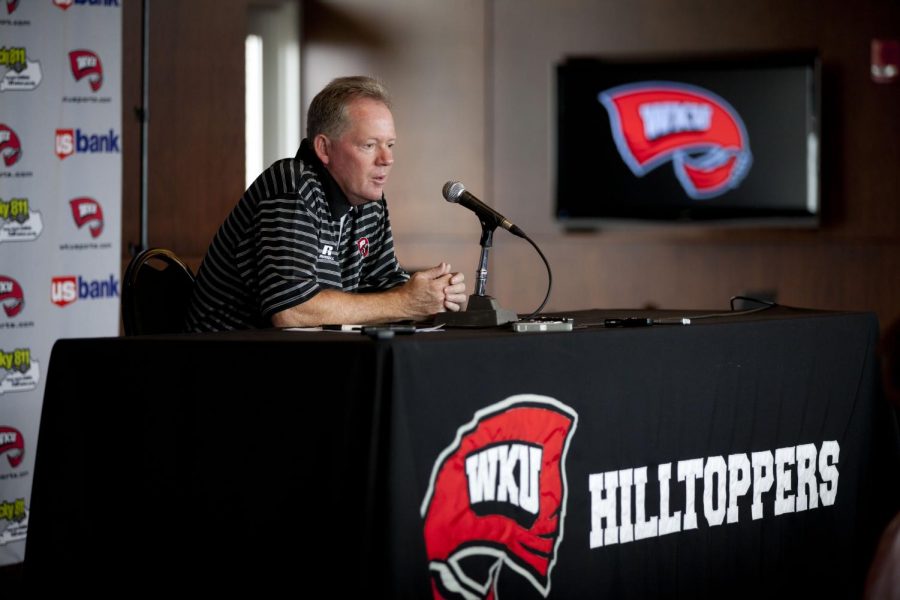 Just hearing Coach Bobby Petrino and others from the WKU football team talk about the upcoming season was exciting at Media Day on Saturday.

It’s been a turbulent offseason for WKU – there’s been so much talk about the transition to a new coaching staff and other changes around the program that you’d be forgiven for forgetting that there’s a game to be played three weeks from now.

We’re about to see the product of eight months of change from former coach Willie Taggart to current coach Petrino, though, and it’s exciting to hear about what we might see on the field this season.

Petrino has had plenty of time to adjust to his role at WKU since he took over as coach in December, so he looked right at home addressing the crowd of reporters at Saturday’s Media Day press conference.

“We’ve been working hard, we’re focused and we’ve continued to have a good attitude,” he said Saturday morning. “That’s important, that we make strides each day in practice. But we still have a long way to go.”

We’re just three weeks away from WKU’s season-opener in Nashville against Kentucky.

If you remember one moment from last season, it was probably Antonio Andrews’ two-point conversion throw to Kawaun Jakes in overtime against the Wildcats in Lexington last September. Trust me, the players haven’t forgotten either – Andrews even said Saturday that he’d embrace involvement in some more trick plays this season if it means he can help the Toppers clinch another win.

Petrino said you couldn’t script a better first game for the Toppers because it’s kept his team working hard in the weight room this summer.

“I don’t know if you could have a better opener for us because it motivates you all winter long,” he said. “It motivates you through spring ball and all summer. Our players are excited about it.”

Running backs coach Kolby Smith played at Louisville under Petrino from 2003-06 – Louisville went 4-0 against the Wildcats in that time, and Smith said he hopes to add another win to that total later this month.

“Dating back to Louisville, we always opened the year with Kentucky,” he said. “I’m excited that we have the opportunity to open with them again. Our motto is ‘nothing changes.’”

It’s hard to tell what will happen in the season-opener. WKU and Kentucky have both brought in new coaches and are experiencing on-the-field personnel changes from last season’s teams. Predicting keys to the game is a guessing game at this point.

For now, though, the Toppers are focused on improvement, not their first opponent.

“We’re always thinking about UK, but right now we’re just getting the offense down,” he said. “In a couple of weeks we’ll start gameplanning for them.”

Conway has three weeks to prepare for the Wildcats in WKU’s first test on the field. The Toppers will be right back at it on the practice field tomorrow to get ready.