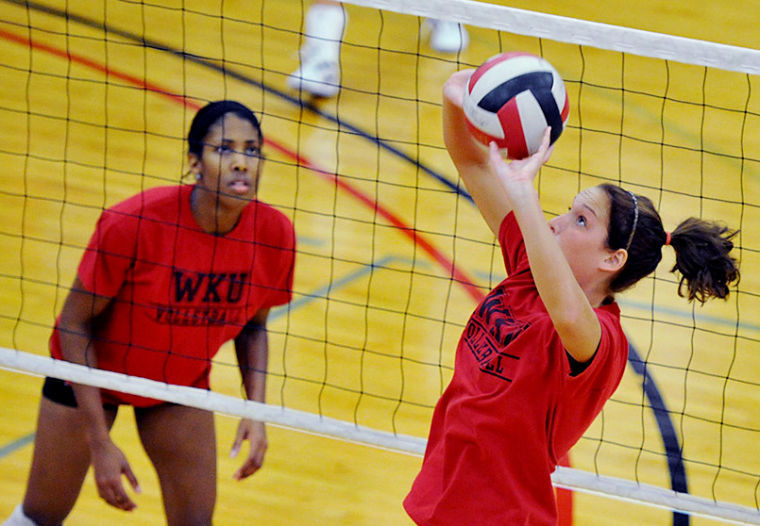 Senior setter Melanie Stutsman sets the ball during practice on Tues. Aug. 27, 2013. WKU has their first match on Friday against Alabama A&M.

Last season the Lady Topper volleyball team had its most successful season in program history. Boasting a record of 33-4, the team won an NCAA Tournament match for the first time in school history and earned its fifth postseason berth in the last 10 seasons.

Five starters from that team will return for the 2013 campaign, which looks to be another promising one for WKU. The team is currently ranked No. 21 in the NCAA, the first preseason ranking in program history, and was unanimously selected by league coaches to win the Sun Belt Conference again earlier this week.

Despite the unprecedented national attention, Head Coach Travis Hudson is not worried about his team slacking off.

“Well we’re going to try and make sure that it’s not (an issue),” he said. “It’s certainly something that I fight every day, it’s on my mind every night when I go to sleep because we do have a talented group and a lot of nights we’re going to be favored going in.

“We did a great job managing that last year, and it’s going to be one of the real challenges for this team as the year goes along.”

The Lady Toppers, however, do have a tough road ahead of them early on.

WKU is set to face five teams in the top 25, including Southern California, who is ranked No. 4 in the NCAA. Of those five games, four of them will be played within the first 10 days of the season.

For Hudson, it’s not about where his team is ranked currently, but where it will be at the end of the season.

“We could play awfully, awfully well for the first couple weeks and be sitting at .500 overall,” Hudson said. “That ranking will fluctuate and as I told our team, I’m not worried about whether we stay ranked in the first three, four weeks of the season, I’m worried about where we are at the end.”

Redshirt senior outside hitter Paige Wessel agreed with Hudson — she said it was an “honor” to be ranked in the top 25, but that they are looking forward to the end of the season, not the beginning.

Not only are the Lady Toppers returning five starters from last year, but four players were honored earlier this week when the Sun Belt Conference released its preseason All-Conference team. Junior middle hitter Heather Boyan, senior defensive specialist Ashley Potts, senior setter Melanie Stutsman, and Wessel were all named to the All-Conference team.

“I guess it’s more of an honor than anything, just to be recognized for what I do,” Potts said. “Now I just have to go prove myself and show that I am a competitor for that. We’ll just see how it goes at the end of the year.”

Right now, Potts and the rest of the Lady Toppers are looking forward to starting the season, which begins this weekend in the Mortar Board Premier in West Lafayette, Ind. The team is set to battle Alabama A&M, USC and Purdue this weekend.

“The character of this team is awesome,” Potts said. “The word I would describe it as is intense, competitive, excited — we’re just really excited to get started and play someone other than ourselves. We get after it each day and it’s really fun, actually. I just love the competition that we have each day in the gym.”

The first home game for the Lady Toppers will be Sept. 3 at 7 p.m. against Belmont.