Toppers wrap up Fall Camp as game vs. Kentucky looms 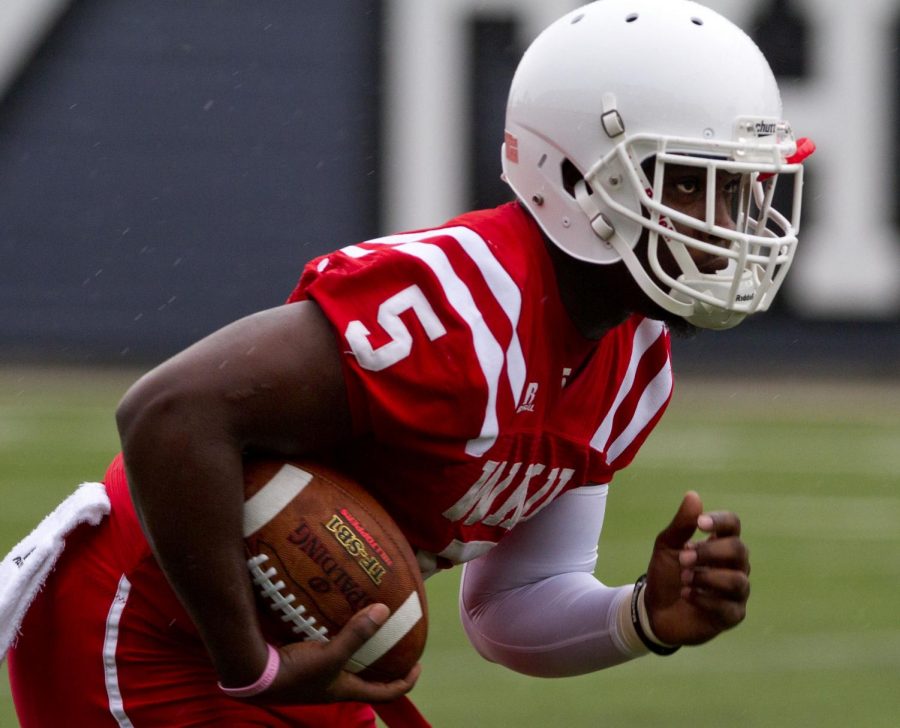 Running back Antonio Andrews runs with the ball during practice at Smith Stadium on Monday, August 5.

After long summer workouts in the weight room and on the field, the Toppers are finally ready for Week One.

Veterans and newcomers reported to Smith Stadium for Fall Camp Aug. 5 to prove to coach Bobby Petrino they were prepared for the season-opener against Kentucky at 6 p.m. Aug. 31 at LP Field in Nashville.

Petrino opened practices to the public for the first half of Fall Camp, which hasn’t been a common act at WKU in the past. According to Petrino, hosting open practices was a good way to get fans more personally involved with the team.

“I think it’s great for fans to come out and see the new players and what we’re trying to do, but it’s also good for our players,” Petrino said. “Our players like to look around and see people watching them. It energizes them and makes practice go by quicker. All of that was good and exciting for our entire team.”

But practices are now closed, and business preparing for Kentucky is being conducted.

WKU and the Wildcats will face off one last time for the finale of a four-year series. UK holds the all-time edge in the series 3-1.

Last season, the Toppers converted a two-point conversion play in overtime that gave the school its first win over Kentucky and first win over an SEC opponent.

Petrino said at the team’s Media Day that there isn’t a better opponent than Kentucky to start off the year.

“I don’t know if you could have a better opener for us because it motivates you all winter long, motivates you through spring ball, all summer long,” Petrino said. “…we’d definitely like to continue playing them.”

It may be several years until another red vs. blue rivalry is fought on the gridiron after the announcement of a three-year series between WKU and Vanderbilt set to start next year.

But for now, Petrino and the Toppers have their sights set on getting the season off with a win, something the coach is used to doing. In his eight seasons of head coaching, Petrino is 8-0 in season openers and holds a 4-1 record against Kentucky.

Kentucky first-year coach Mark Stoops hasn’t announced who will start at quarterback when the Wildcats look for revenge against the Toppers. The coach said that sophomores Maxwell Smith and Jalen Whitlow would receive playing time.

Last season, the Toppers defense had a field day with Smith, picking off the young quarterback four times.

Redshirt sophomore defensive end Gavin Rocker said the defense will be prepared for whoever lines up behind center for the Wildcats.

“Whoever they decide to play, that’s who were going to go against,” Rocker said. “And we’re preparing for UK, not just one person.”

Not knowing the starting quarterback isn’t the only unknown about Stoops’ first Kentucky team.

Like what Petrino has done at WKU, Stoops brought a whole new coaching staff with him to Lexington.

“The challenge is you watch video of where they (coaches) came from,” Petrino said. “Obviously watching Florida State defense, Texas Tech offense. I have gone against Neal Brown when he was the offensive coordinator at Troy.

“Everybody formulates their team around their talent. They’ll obviously do different things than what we’ve just studied on film.”

Playing as the underdog has been the theme for WKU in each contest with the Wildcats. According to Vegas Insider, Kentucky was listed as a 4.5-to-5 point favorite again over the Toppers.

The team doesn’t see it that way — at least Sean Conway doesn’t. The senior center, who has started every game at WKU since arriving on the Hill, has fought the Wildcats in the trenches for every game, but he doesn’t look at the team as the underdog.

“I don’t really read into that,” Conway said. “We’re just going down to Nashville to play ball. Just another team…we want to win, obviously, and that’s what we’re going to do.”