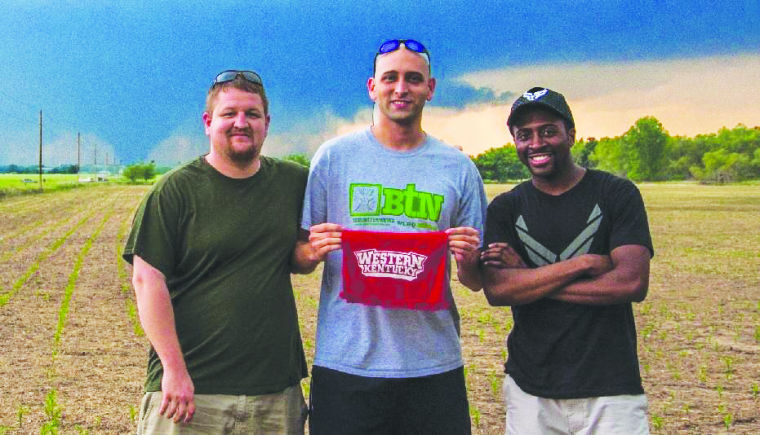 WKU alumni Kyle Berry, Landon Hampton and Nathaniel Shearer pose for a photo in front of a storm in Bennington, Kan. on May 28. The crew witnessed a wedge EF4 tornado.

While natives of Tornado Alley were fleeing and taking shelter from severe tornadoes that battered the Great Plains in late May and early June, a team of storm chasers composed heavily of WKU meteorology alumni were mere miles from the heart of the storms documenting the destruction and terrifying tornadic and severe weather activity.

Landon Hampton, Beech Tree meteorologist and a WKU alumnus, as well as Jeremy Hack, a video producer, were among a team of storm chas- ers including Nathaniel Shearer and Kyle Berry of the WKU meteorology department that spent May 26 through June 1 tracking storms in Kansas, Oklahoma and Texas. The team traveled 3,200 miles during their storm-chasing venture in a Yukon XL loaded down with laptops, usb ports, iPads, iPhones, cameras and other technologies to document and record the inclement weather.

The storm team witnessed three tornadoes and documented two tornadoes on camera and video. The team was 8 to 10 miles away from the May 31 Oklahoma City EF-5 tornado that was recorded as the widest ever with a width of 2.6 miles. The monstrous tornado also reached speeds of 295 mph and claimed 24 lives according to the National Weather Service.

“We saw this monstrous, huge dark shaft within that storm,” Hampton said. “We didn’t have a clear visual, hardly anyone did, but that was very scary, very frightening to witness.”

It was Hampton’s fourth consecutive year of traveling to Tornado Alley to document, record and witness severe weather activity. It was Hack’s second visit after going on his first storm chase last year.

“This trip was definitely better than last year’s trip because last year we didn’t get any- thing,” Hack said. “This year we got three. Got some pretty close up footage of an EF-4 in Bennington, Kan. It was pretty surreal.”

Storm chasing and meteorology pioneer Tim Samaras and two other chasing partners were among the 24 who died during the massive tornado over the summer.

“Whenever someone like Tim Samaras loses his life, someone who is not out for fame and money, someone who is all about the research and scientific portion, it’s very humbling,” Hampton said. “It really put the whole realm of possibilities in perspective that it can happen to everyone.”

This summer, Durkee lead a group of eight graduate and undergraduate students to document, analyze and study severe weather across the Great Plains as part of his Field Methods in Weather Analysis and Forecasting course.

He said the course gives students invaluable experience that sets them apart in the field of meteorology.

“I believe we offer our meteorology students a wonderful and unique experience that is quite beneficial for their future careers,” Durkee said. “Our philosophy for the program is to instill excellent written and communication skills in our students via research, confefences and peer-review publications, and to provide unique hands-on learning experiences such as the Storm Chase program. It is this reason that our students are finding postgraduate employment and or getting accepted into top graduate programs.”

Berry said the Storm Chase program rivals that of any school in the nation. He said it is remarkable considering WKU’s meteorology program started in 2007.

“For WKU to be competing at the national level with big schools and doing these storm chases, it makes a big statement,” he said.