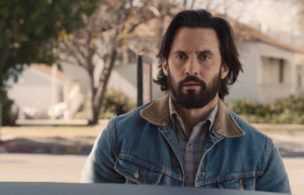 This Is Us has shown us Jack (Milo Ventimiglia) and Rebecca’s (Mandy Moore) relationship and, then, years after Jack died, Rebecca and Miguel’s (Jon Huertas). But if you feel like you haven’t gotten enough of best friends Jack and Miguel in the flashbacks, you’re not alone. Ventimiglia agrees.

We’ve seen Jack as father, husband, alcoholic, soldier, and guy after love, but “we haven’t explored enough of Jack the friend,” Ventimiglia said during a recent conversation with the press. See Also‘This Is Us’: Uncle Nicky and Miguel Clash Over Kevin’s Wedding Plans in Sneak Peek (VIDEO)
Plus, can Kevin find the right words to ask Randall to be his Best Man?

And, he says, while “it’s been talked about for five years that [he and Miguel] are best friends … I feel like we don’t get enough of them as best friends. I think it’s time I asked [creator Dan] Fogelman to send Jack and Miguel on a guys’ weekend or something where — I don’t know what they’re doing — they’re just spending time together.”

He did tease, however, “a really beautiful scene” he shares with Huertas that will be seen in the April 6 episode.

As for now, whether we see something on screen or not, the actor continued, “Jack’s part of these characters.” With the various timelines the series covers, “there’s still a lot of ground to cover,” including more on his relationship with Rebecca.

And while Jack isn’t a physical part of the Pearsons’ lives anymore, his brother Nicky (Griffin Dunne) is. Nicky even travels across country to meet his nephew Kevin’s (Justin Hartley) babies, one of whom was named after him. That Nicky has come this far and rejoined the family, well, “Jack would be incredibly proud,” Ventimiglia said, noting that while his character “was equipped to handle” the experience of war, Nicky was not. “Nicky became dependent on drugs to numb himself from that horrible experience, so Jack has to lighten up a little bit. That’s probably one of the two moments in playing Jack that I really disagreed with how he handled something was with his brother, trying to understand that addiction and not find some way to come together.”