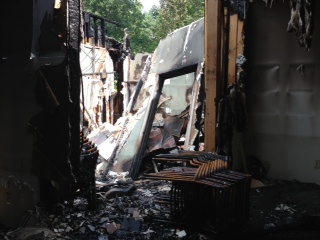 Lightning is believed to be the cause of the fire that destroyed the Downing Museum at the Baker Arboretum at 4801 Morgantown Road.

Firefighters responded to a fire that occurred just after sunrise Thursday morning at the Downing Museum at the Baker Arboretum at 4801 Morgantown Road in Bowling Green.

Firefighters worked for most of the day battling smoke and flames and then put out hotspots. No one was injured in the flame and grounds crew workers say over 90 percent of the artwork was salvaged.

Jerry Baker said he was outside early Thursday morning when he saw lightning strike the museum building.

“I was outside with my dog when I saw lightning hit,” Baker said.

Chris Lindsey, a grounds keeper at the Arboretum, said he arrived at 6:45 Thursday morning when he saw other employees with water hoses attempting to extinguish the flames.

“After the firefighters got here and started really putting water to it and got the basement doors open to let the smoke out of there we started getting artwork out of the basement,” Lindsey said. “Firefighters were all helping do that and (the fire) just kept crawling up the walls.”

Lindsey said as crews added water to the building, the fire grew and eventually destroyed the inner bathrooms and theater room.

Lindsey said the first load of salvaged artwork was taken and stored in office space at Airgas in Bowling Green.

Alvaton, Barren River, Browning, Hadley, and Woodburn volunteer fire departments along with several grounds crew workers all worked to rescue the artwork from the basement.

Baker said he is proud of the work the volunteers put in to rescuing the artwork.

“They did a great job and they came very promptly,” Baker said. “I was pleasantly surprised. Not that I thought they wouldn’t do a great job, I knew they would do a great job because I’ve had to use their services several times and they’ve always been prompt and on the spot.”

Baker said the plan is to build the museum back to its original structure.

“We’re going to put it back like it was. I don’t have any reason to make changes,” Baker said.

Baker and Joe Downing were long-time friends and designed the museum, which officially opened in 2009.  When Downing passed away in 2007, the museum and arboretum was gifted to WKU, making the largest single gift at $15 million endowed from one person to a public Kentucky university.