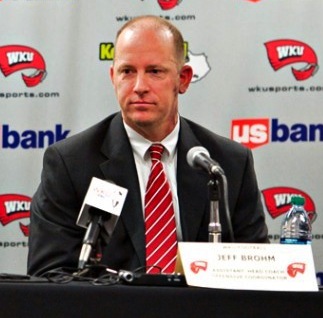 Jeff Brohm introduced as WKU's offensive coordinator and assistant head coach on Jan. 2 in a press conference in Diddle Arena.

WKU offensive coordinator and assistant coach Jeff Brohm will be inducted as a member of the 2014 class of the Kentucky High School Athletic Association Hall of Fame, KHSAA commissioner Julian Tackett announced in Lexington on Sunday.

Brohm became a three-sport athlete at Louisville’s Trinity High School and is one of two players to have their football uniform retired, the other being his younger brother Brian Brohm.

Brohm was nominated by Dennis Lampley, athletic director at Trinity and was Brohm’s head football coach at the school.

Lampley said that Brohm was one of a kind and was a multi-threat athlete.

“He is one person going into the Hall of Fame that is truly deserving of being there,” Lampley said. “That is where he needs to be. He was a threat passing and running. He could create a monster for you, and we used him the best we could.”

The first-year WKU coach shined on the gridiron as a star quarterback for the Shamrocks by earning All-District, All-Region and All-State honors along with being named Kentucky Mr. Football in 1988. All of those honors were capped off with an undefeated senior season and a Class 4A state championship, passing for 1,707 yards and 20 touchdowns for the year.

Trinity President Rob Mullen was an assistant principal while Brohm was in school. He said he had a natural ability to lead on and off the field.

“It’s cliché, but Jeff is one of those people who is considered a natural leader,” Mullen said. “People looked up to him not just because of his athletic ability, but because of his character. He was elected president of his senior class in a landslide because people thought so highly of him, they knew they were electing someone who was not only a good athlete, but someone who was a solid person.”

Mullen said one moment sticks out in his mind of a playoff game against Boone County in Brohm’s senior year. It was this moment that Mullen was in complete awe of what was to possibly come of Brohm’s career after high school.

“It was a tough fought game, and (Trinity) had to score near the end of regulation in order to tie the game up to go into overtime,” Mullen said. “Jeff led us on a two minute drive down the field and we scored a game tying field goal and went on to win it in overtime.  During that run it was a mixture of pass and runs all orchestrated by Jeff.

“I remember saying to the offensive coordinator after the game ‘you did a really great job calling those plays’, and he said ‘Rob, I didn’t call a single play. Jeff did all of that’”.

Brohm’s accolades on the field earned him the Kentucky High School Player of the Decade award for the 1980s before attending college.

After a prolific college career at Louisville and time behind center in the NFL, Brohm returned to coach at his alma mater as a quarterback coach in 2004 and became assistant coach in 2007. Before coming to WKU, Brohm spent time with Florida Atlantic, Illinois, and most recently Alabama-Birmingham as the offensive coordinator.

Brohm is one of 11 members to be inducted into the 27th KHSAA Hall of Fame class. Brohm and his former coach, Lampley, will be at the Lexington Convention Center to accept the award Sunday, April 27, 2014.

“He’s real special to us and our program at Trinity,” Lampley said. “His intelligence level is way up there. He’s smart, very calm, and makes really good decisions. That’s why all these college coaches have wanted him. (WKU) is extremely lucky to have him down there. “