‘Toppers on Tour’ makes a trip to Nashville 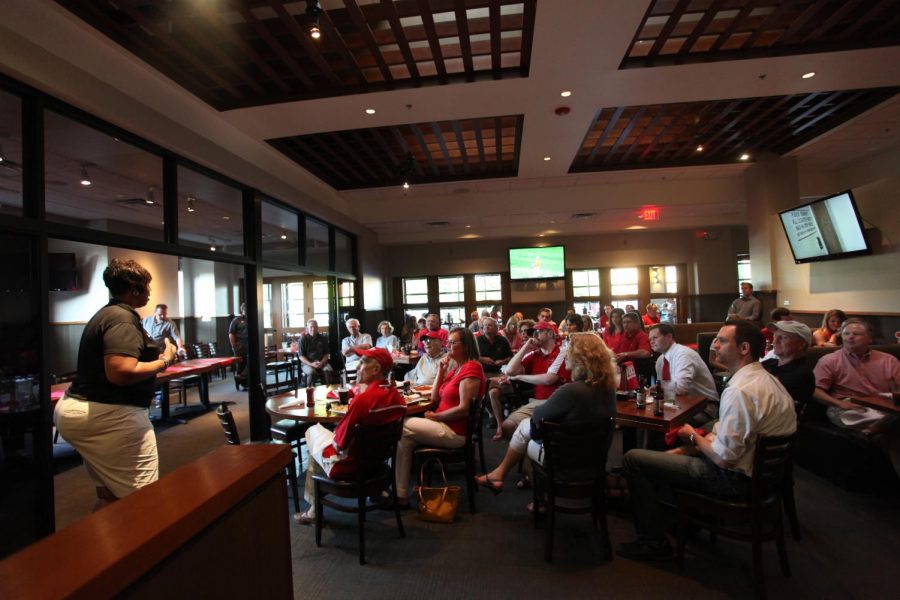 WKU women's basketball coach Michell Clark-Heard talks to the crowd during 'Toppers on Tour' at Jonathan's Grill in Nashville, Tenn.

Toppers on Tour made its third stop of the tour in Nashville at Jonathan’s Grille in the Green Hills Village.

Nashville is the only stop for Toppers on Tour out of the commonwealth of Kentucky. Executive director of the WKU alumni association Rick Dubose said it’s good for the association to reach out into another state.

“It’s always good to come into Nashville because it’s so close and we do have a large alumni base and there’s such a future for us as far as student recruitment and selling tickets for athletic events,” Dubose said.

Coach Petrino said since coming to WKU in December, he’s learned that Nashville could be a hot spot for the WKU fan base.

“This is one of the areas that we have one of our biggest alumni bases and the response and support here is really good,” Petrino said. “To be able to come down here and get as many people out and see all the alums and make sure we get them up to our stadium. (Nashville) is a beautiful place to come and it’s exciting to come down here.”

Petrino told the crowd he looked forward to growing the recruiting base from the Nashville area.

WKU athletic director Todd Stewart said for the fan base to grow it’s important for promotional events like Toppers on Tour to reach outside of Kentucky.

“If we’re going to grow our fan base and expand our HAF membership we’re going to have to do it outside Bowling Green,” Stewart said. “Nashville to me is a very untapped market for us. We have a tremendous group of alumni here, we just have to better job of engaging them.

“We certainly try to come to Nashville as often as we can. We have the UK game here August 31, we played Louisville here in basketball last year. It’s something we need to continue to do.”

Among the alumni in attendance was Dr. Jeff Feix, son of former WKU player, coach, and director of athletics Jimmy Feix.

Jeff Feix , who works out of Nashville as director of Forensic Services at TN Department of Mental Health and Developmental Disabilities, was a manager for the WKU football team from 1978-82. Feix said there isn’t a better time to be involved with events at WKU.

“It’s a really exciting time to be on the hill,” Feix said. “Coach (Willie) Taggart built the football program up the last couple of years and now we’ve transitioned to coach Petrino. He’s a super coach and does really great with the kids. We’re really proud to have him working at WKU and he’s one of the nicest guys you’ll ever meet.”

Dubose said Toppers on Tour is looking to share with alumni and fans all the excitement buzzing around WKU.

“There is so much energy across the campus, but the energy in athletics is just out the door,” executive director of the WKU alumni Association Rick Dubose, said. “Collectively, I don’t think I’ve seen a better coaching staff at WKU, and I’ve been around a lot of years.”

The tour will make two more stops for the summer. They will be in Elizabeth town June 17 at the Heartland Golf Club and Glasgow on Tuesday at the Boys and Girls Club of Glasgow-Barren County.