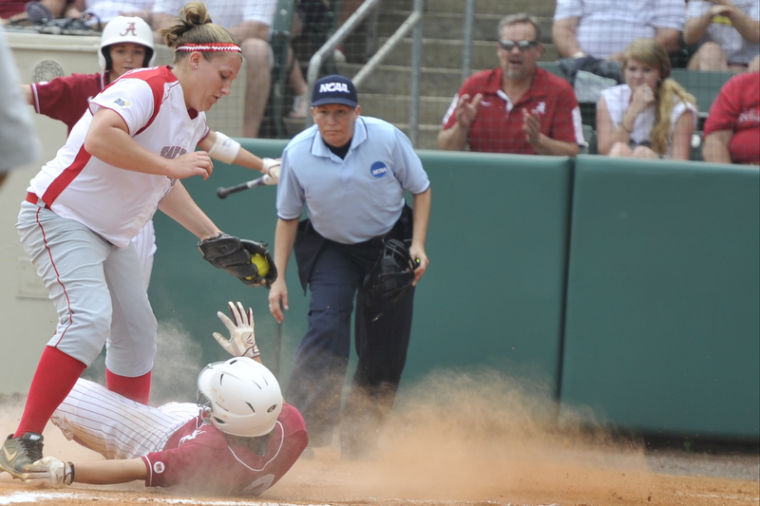 Junior pitcher Emily Rousseau tries to tag out a runner stealing home after a pitch is under thrown. WKU lost 13-1 against Alabama in the Tuscaloosa NCAA Regional Softball Championship game at Rhoads Stadium in Tuscaloosa, Ala. on Sunday May 19, 2013.

The Lady Toppers recorded just four hits to Alabama’s 15, as the Crimson Tide cruised to a 13-1 victory in five innings. It was just the second time all season WKU has lost by mercy ruling.

Despite the season-ending loss, coach Tyra Perry said the Regional experience, the first in school history, was a breakthrough for the WKU softball program.

“We came to play and I believe we did that,” Perry said. “It’s a great experience for our program. I know that the returners are excited about the possibilities now. Our program has definitely moved into a different direction all thanks to our six seniors that we have.”

Senior pitcher Mallorie Sulaski started in the circle for WKU and allowed four hits and two earned runs in a little over one inning.

No. 10-seed Alabama was aggressive early, putting two runners in scoring position with no outs in the first inning before a RBI sacrifice fly gave the Crimson Tide an early 1-0 lead.

Alabama extended its lead to 2-0 off a leadoff solo home run in the next frame after the Lady Toppers were retired in order in the bottom of the first.

Junior pitcher Emily Rousseau made her way to the circle following the homer and two additional Alabama hits.

A bases-loaded wild pitch allowed the Crimson Tide to score a run from third in the top of the second before a one-out grand slam to left center field added four more runs for the host team.

Alabama added to its sizable lead in the top of the fourth inning off a RBI single to left field and a RBI sacrifice fly to right to give the Crimson Tide a nine-run advantage.

The Lady Toppers gave up 11 hits through the first three and a half innings of play.

After loading the bases in the top of the fifth inning, the Crimson Tide tacked on two more runs with a RBI single up the middle before another RBI sacrifice fly gave the host team a 12-0 lead.

Another RBI single extended the Alabama lead to 13-0 before the Lady Toppers mustered a run in the final inning, making the final score 13-1.

The Lady Toppers’ season will go down as the most successful in program history. WKU broke the all-time wins record and claimed its first-ever Sun Belt regular season championship and NCAA Regional birth.

Senior infielder Ciara Garcia said her four-year journey from the bottom to the top is one she will cherish forever.

“It has been a great experience,” Garcia said. “…Every year we have grown so much…this has been such a great ride. It’s just weird it’s suddenly done…I loved my team.”