Former Topper has been a slam dunk in NBA 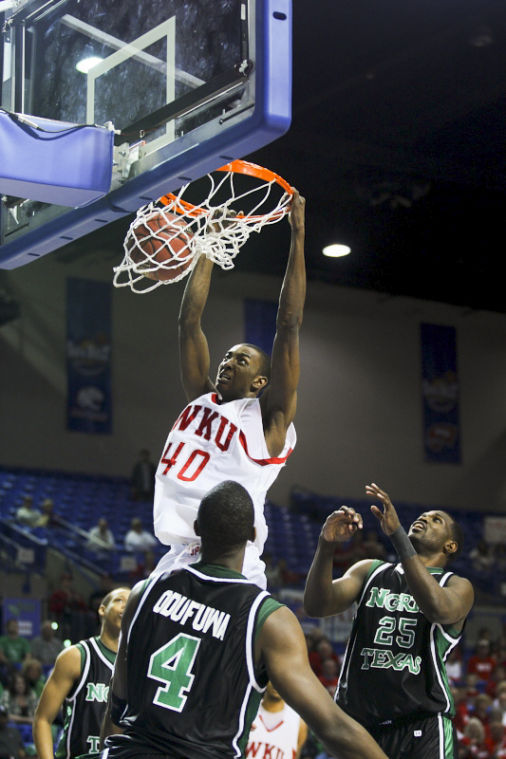 Jeremy Evans (40) dunks as North Texas players George Odufuwa and Eric Tramiel watch during the Sun Belt Championships in 2009 in Hot Springs, Ark. Evans has been playing for the Utah Jazz the past three seasons.

He used to wear red and white – the colors of the Toppers. Now he the wears green, purple and gold, standard for Jazz uniforms.

The 3-point line is three feet further away than it was in college. The restricted area is a foot back. The shot clock is set at 24 seconds, 11 ticks shorter than that of college basketball.

The competition is different too.

Every night his opponents are faster, bigger, and stronger than they were in the Sun Belt.

Evans recognizes that his life has changed since he was picked in the second round of the 2010 NBA Draft.

“From college to the NBA is just a whole new level,” Evans said in an email. “I guess being recognized has changed a lot. Not only that but it has been a chance to play in the NBA, words really can’t describe that feeling.”

His 6-foot-9 frame, enormous wingspan and top-tier athleticism piqued the interest of NBA scouts while he was living on The Hill.

Evans averaged 10 points, 6.9 rebounds and 1.8 blocks during his senior campaign for the Toppers.

His efficiency around the rim excited scouts — Evans shot 64.9 percent from the field with most of those shots coming near the basket.

But Evans had his weaknesses too.

In a 2008 scouting report, DraftExpress writer Rodger Bohn wrote Evans relied on his athleticism most of the time, rather than fundamentally rebounding or playing defense.

“He appears incredibly uncomfortable shooting the ball from the perimeter, hesitating as if he needs to ask permission before launching one up,” he wrote.

Evans worked for the next season to bypass any flaws in his game and was drafted by the Utah Jazz with the No. 55 pick in the 2010 NBA Draft.

“No one thought Jeremy Evans was going to play in the NBA other than Jeremy Evans,” WKU coach Ray Harper said.

Harper joined the WKU coaching staff in 2008 and helped to coach Evans for two seasons.

“He believed in it,” Harper said. “He’s a kid that didn’t even make first team all-conference.”

In his rookie season for the Jazz Evans logged 9.3 minutes per game. His playing time has since decreased, despite his increase in production, due in part to the fact that Utah’s roster is loaded with young big men looking for playing time.

His rebounding rate has increased each year in the big leagues. In the 2012-13 season Evans grabbed 15.6 percent of rebound opportunities when he was on the floor.

His ability to finish around the basket has also improved — he shot 76.2 percent at the rim, a figure that would put him in the top-20 in the NBA.

Evans credits his quickness, for him being able to translate his game to the NBA.

“The guys are usually a lot bigger then I am,” Evans said. “I try to use (my quickness) to my advantage though, my quickness and my jumping ability.”

His jumping ability has helped him carve a reputationas one of the top dunk threats in the league.

In early 2012 the hashtag “#LetJeremyDunk” swept through the Utah Jazz and WKU fan bases to attract attention around the NBA to get Evans into the 2012 NBA Dunk Contest.

When New York Knicks guard Iman Shumpert withdrew from the competition due to injury, Evans was added as his replacement.

In his last dunk, Evans wowed the crowd by jumping over Jazz teammate Gordon Hayward, catching two basketballs, and finishing them simultaneously.

The dunk earned Evans a victory — he was crowned the dunk champion of the 2012 NBA Dunk Contest at All-Star weekend.

Evans was invited back to All-Star weekend to defend his title in February but he fell short, finishing second and losing to Toronto Raptors’ rookie Terrence Ross in the final round.

He has had flashes of brilliance in games as well, earning a spot in SportsCenter’s Top 10 plays multiple times.

In a preseason game against the Los Angeles Clippers this year, Evans reached out with his go-go gadget arms and blocked Los Angeles center Ronny Turiaf on a mid-range jump shot. Evans gathered the ball and went coast-to-coast, dunking all over Turiaf on the other side.

Videos of that play have combined for over a million views on YouTube.

Months later Evans made the highlights again, this time by displaying his athleticism in the form of an alley-oop.

Utah’s veteran guard Jamaal Tinsley brought the ball across half court and launched an alley-oop towards the rim intended for Evans.

At the time of the pass, Evans was behind the 3-point line. Evans sprinted down the pass, jumped with a foot just inside the paint and finished cleanly at the rim.

Evans, along with WKU’s other NBA player, Boston Celtics guard Courtney Lee, have become guys that current WKU players can look up to, according to Harper.

Evans, on the flip side, still maintains relationships with Harper and players on the team. He said he still talks with some of the guys on the phone and hopes to meet with them again in the summer.

Evans still keeps up with the WKU basketball program, and said that it, under coach Harper, is going in the right direction.

“He (Harper) is not going to let me down,” Evans said. “I still talk to Coach Harper all the time and he is a great guy for the program.”