Z is for Zen: WKU student finds peaceful center in the midst of finals chaos 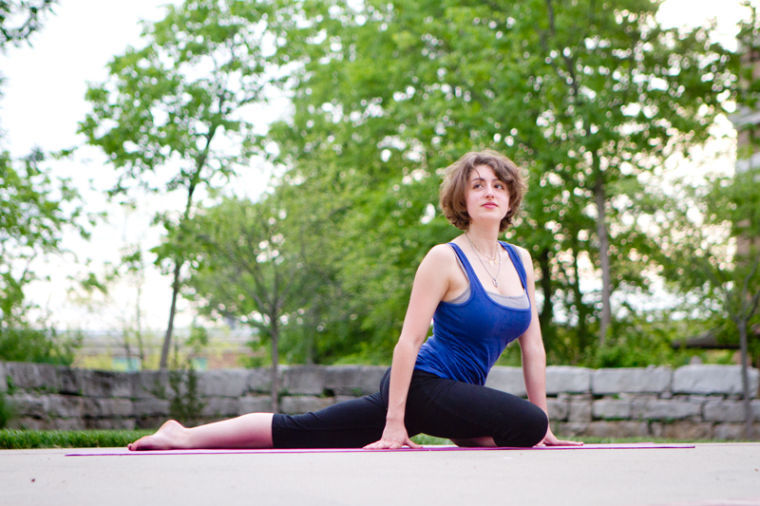 Louisville freshman Bryna Sims finds peace among the hustle and bustle of daily class work by doing yoga. "Yoga gives me a sense of self-awareness," Sims said. "It makes me feel graceful." With finals right around the corner, finding the time to get away is getting harder and harder. "It helps me to stay centered, when everything else is so chaotic," Sims said.

In these final weeks of the semester, most, if not all, WKU students are feeling busy, stressed out and overwhelmed. It may even seem like there’s no spare time to just calm down and breathe.

Bryna Sims, a 19-year-old Louisville freshman, is one of many WKU students that are learning to find their zen through yoga.

“Zen for me is being brought back to center,” Sims said. “When everything around you is chaotic, to come to a place that’s calm. Even when you’re stressed out, knowing that everything will work itself out, and you’re at peace and serene with knowing that.”

Sims said yoga helps to give her a good sense of awareness.

“When I feel like nothing’s in my control, it feels nice that I’m able to make my body do these various poses,” Sims said. “There’s a lot of grace and power in accomplishing something like that.”

Sims cleared up an aspect of yoga that might have discouraged some from trying it.

“One thing people might think is off-putting is the spiritual side,” Sims said. “But there doesn’t have to be that in a religious sense. You just need to be aware and connected with yourself.”

Meredith Smith, a 20-year-old Louisville senior, has taught yoga classes at the Preston Center for nearly a year and said yoga doesn’t come easy all at once.

“Everyone has areas they can improve on,” Smith said. “No matter who walks through the door, there’s always room for improvement in yoga.”

“Guys might not think that yoga is a demanding activity,” Greer said. “But once you get in there and try those poses, you realize this is actual work and you can’t slack off or take it easy because you might fall down or falter in your pose.”

Sims mentioned the positive effect yoga can have on other physical activity.

“For example, with weight lifting, if you do yoga, it works muscles in a different way, so you’re more likely to improve with that as well,” Sims said. “It won’t necessarily build muscle, but it will strengthen them in another kind of way.”

Smith said yoga can also help to deal with the stress of final exams.

“As college students, we’re thinking about so many things and when you step into a yoga class, you don’t have to think as much,” Smith said. “You just think about your breath, which you don’t really think about during the day.”

Smith said deep breathing in yoga gets more oxygen to the brain, which helps during those major cram sessions.

“After my zen activities, I feel much more mentally active,” McDowell said. “I’m able to process and think about things a lot better and more clearly.”

Greer said the zen of yoga makes him feel empowered.

“You do feel really loose and ready to tackle the world after you do yoga,” Greer said.

Smith hopes to inspire more people to start finding their zen through the art of yoga.

“You’ll never know until you try it,” Smith said. “What can it hurt? It’s 45 minutes long. That’s the only thing you will have wasted if you don’t like it.”