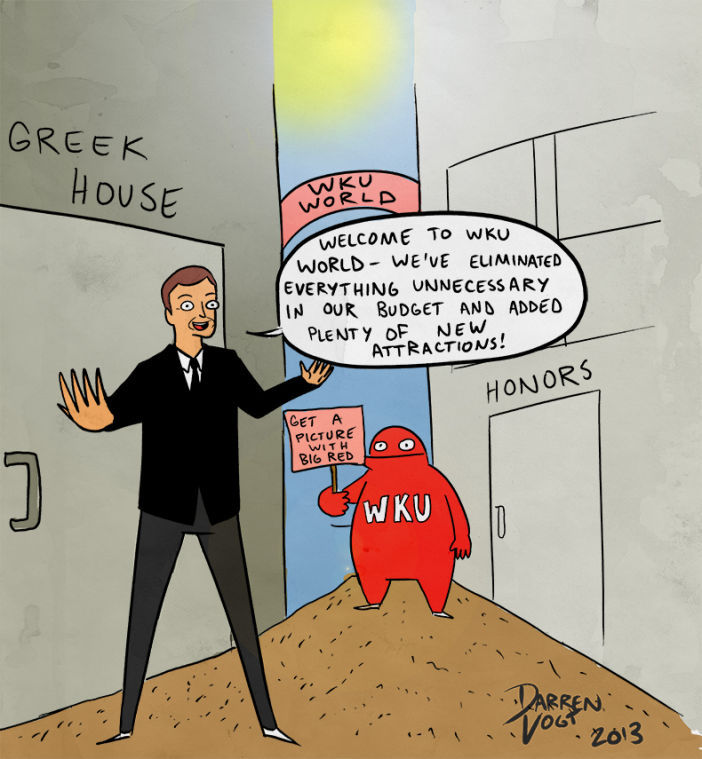 The Issue: The Council on Postsecondary Education’s decision to limit this fall’s tuition increase to 3 percent left a $2.1 million gap in WKU’s budget. In an email to faculty and staff on Wednesday, President Ransdell announced the cuts WKU will make to account for the difference.

Our Stance: Though Ransdell succeeded in preserving the jobs and base salaries of all WKU employees, those jobs would not be in jeopardy if WKU did not insist on expanding beyond its current means.

Somehow, and even we’re still scratching our heads about it, President Gary Ransdell managed to find his roughly $2.1 million to cut in a strapped budget without a single layoff or pay cut in base salary.

After the Council on Postsecondary Education decided to cap the in-state, undergraduate and face-to-face student tuition increase at 3 percent on April 18, it seemed inevitable that WKU would be seeing some inconvenient salary cuts, maybe even job losses.

After all, in order to trudge on with current expansion plans, the money had to come from somewhere. In an email to faculty and staff on April 18, even Ransdell did not seem entirely sold on the possibility of avoiding layoffs.

“Every effort will be made to protect as many jobs as possible and to act in the best interest of our students and employees,” he said in the email.

Not exactly a ringing promise of job security.

However, he managed to pull through.

Now of course, some of the cuts are unpopular — a big dig into the student yearbook, the Talisman, has spurred a Facebook page protest, and we’ve detailed the effects of the other cuts in other sections of this paper.

But the fact remains most students won’t be facing that originally proposed 5 percent tuition increase, so the termination or scaling back of these types of luxuries should be far from unexpected once the decision was made to avoid broad cuts to all departments and layoffs.

But this entire budget trimming deal has left us at the Herald with a burning question.

Why did WKU continue to trudge on with expansion plans, such as the one for the Honors College and International Center, and the Greek Row project.

When the Board of Regents met last month, they approved a measure to purchase two properties on Normal Drive, one at the cost of $240,000 and the other’s price is still unclear but approved to be purchased by eminent domain if necessary. These properties will become the site of the new Honors and International Center. Other lots were purchased for the Greek Row project.

Of note, it did occur to someone at the meeting that WKU ought to pause this project — you know — just until WKU’s not slashing whole departments’ budgets to save jobs.

Faculty Regent Patti Minter and Student Regent Cory Dodds both voted down the acquisition of the property.

Minter said after the meeting that constructing the Honors College and International building “is absolutely not a need.”

She understands that you can’t spend money that you do not have.

Unfortunately, that vision is not shared by the rest of the Board of Regents, pursuing this Greek row housing initiative and the new Honors College and International Building.

If these projects were put on hold, WKU wouldn’t be making these budget decisions in the first place or at least not to this degree.

So while it’s great that jobs were saved and damage was minimized to the average student’s education, we’re all left with that lingering question.

Was the damage even necessary?