Boka, Seay and Reeves elected as SGA’s executive officers for the upcoming year 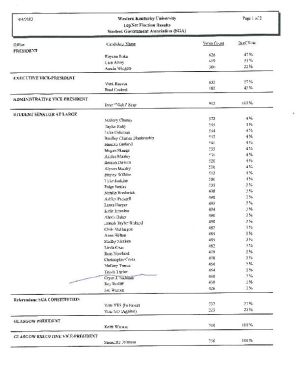 Bowling Green junior Keyana Boka, the current executive vice president, was excited to hear that she will be the new president of SGA.

“It feels like achieving something that I’ve wanted for a very, very long time,” Boka said. “It’s almost surreal.”

Boka said she is looking forward to moving forward with her many ideas for next year.

Louisville graduate student Mark Reeves said it felt good to win for him as well.

“I’m really privileged and honored that the students chose this,” Reeves said. “I really appreciate the opportunity to serve the students.”

Boka took 47 percent of the vote for president with 626 votes.

As for the other presidential candidates, Cain Alvey, the current administrative vice president, was second with 419 votes, or 31 percent, and Austin Wingate was third with 300 votes, which equaled 22 percent of the vote.

For executive vice president, Reeves received 57 percent with 632 votes, and Brad Cockrel came in second with 485 votes, or 43 percent.

The race for administrative vice president was uncontested.

The senators who will serve in SGA’s senate were also elected; 26 student senators were announced.

Smithland senior Cory Dodds, the current president of SGA, said he is looking forward to what the new group of senators will do in the fall.

“I think that we elected a good group of senators, and I look forward to seeing what they will do next year,” Dodds said.