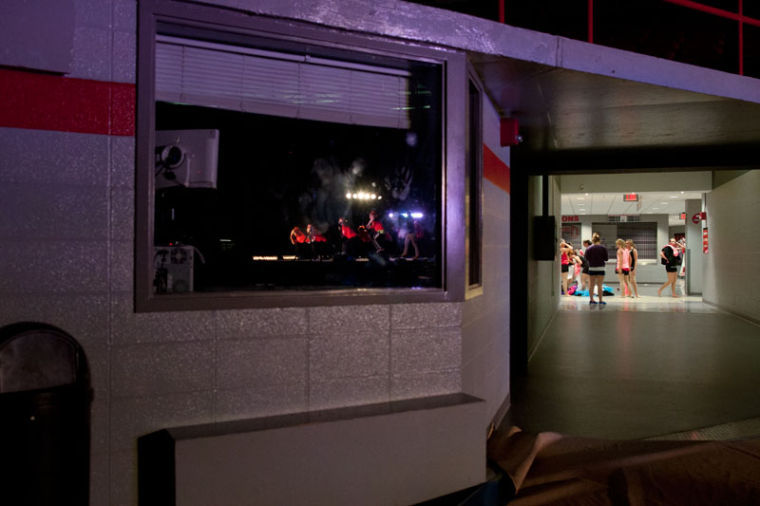 The Greek community gathered in Diddle Arena on Sunday to support each other during performances, which included singing and dancing to a chosen soundtrack. The theme this year was “When I grow up…”

Erica Sturgill, Spring Sing coordinator and Lexington senior, said she and her co-host, Michael Bjoralt, came up with about 30 different “jobs””that could be chosen for a routine’s theme.

“We sent the list out, and they picked their top three,” she said. “Then they all got to pick a number out of a hat, to decide which organization got to pick their job first.”

The soundtracks included compiled songs that relate to the jobs chosen.

The jobs ranged from being a casino worker, an astronaut, a reality TV star, a travel agent or a newscaster. Sets included a triad of cardboard backdrops, props held behind the dancers, and in the casino routine, enormous wood dice.

Sturgill said she was impressed by the creativity.

“Everyone was really creative and did great at thinking outside of the box,” she said

After seeing the performances initially two weeks ago during preparation, Sturgill said seeing them on stage was amazing.

“When I saw everyone come out with their costumes and backdrops, it was surprising,” she said. “Everyone turned out 100 percent.”

Sturgill said the night was the perfect way to kick off Greek Week.

“What better way to kick off Greek Week than to have everyone all together in one place?” she said.

Sonora junior Jessie Cooper said some of the performances showed a lot of skill.

“Some were lacking in imagination, but some showed a lot of care and skill, and you could tell how much was put into it,” he said.

As a resident assistant in Meredith, she came to see some of her residents perform.

Tamm also liked the props used in the routines.

“The props were amazing; very inventive,” she said.

The groups will be judged based on a point system, by five different judges who are involved in campus life. The winners will be announced at this coming Sunday’s Greek Convocation.