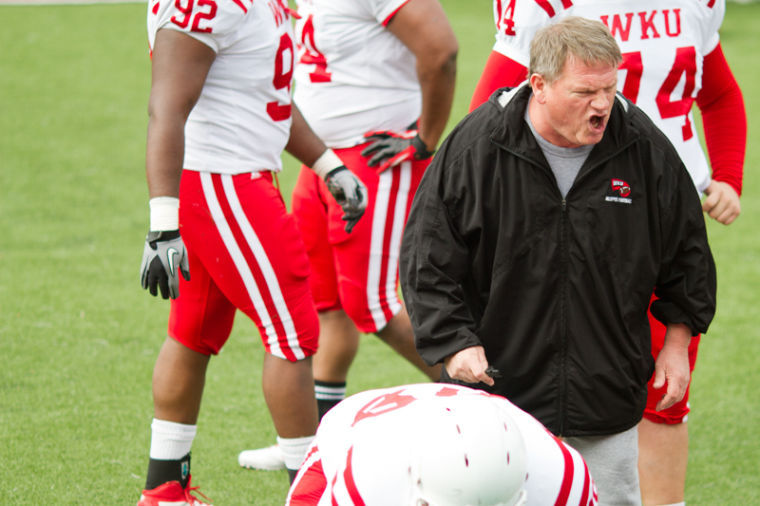 Offensive line coach Neil Callaway yells out instructions to offensive lineman while they do drills during spring practice.

The WKU offense that hits the field next season will look a lot different than the one that brought the Toppers to their first FBS bowl game in school history this year.

The squad was already going into transition with the departures of graduated seniors such as tight end Jack Doyle, WKU’s leading pass-catcher, and quarterback Kawaun Jakes, who owns the WKU record for career touchdown passes.

Throw in a new playbook and an entirely new coaching staff and you’ve got a group going through a complete metamorphosis.

“We have been struggling a little bit with the new offense, but practice makes perfect,” senior center Sean Conway said at Saturday’s practice. “We are just going to keep coming out and grinding until we get it right.”

Conway is one of the most experienced players returning to WKU’s offense, spending last season starting on an offensive line that featured two seniors.

Conway said with two weeks of spring practice under their belts, his fellow players are getting used to practices under coach Bobby Petrino and the new coaching staff.

The offense thrived off of the run last season — WKU picked up 2,362 yards on the ground behind junior running back Antonio Andrews’ record-setting year.

The passing game figures to be more prominent in the WKU offense this season. Petrino’s offense has succeeded through the air in the past under quarterbacks such as Louisville’s Brian Brohm and Arkansas’ Ryan Mallett.

“We are a little different style,” Callaway said. “We are going to run the ball, but we are also going to have drop-back passes.”

The Topper quarterback situation has a long way to go, though.

Offensive coordinator Jeff Brohm said he’s been pleased with the progress he’s seen from the three potential quarterbacks in the first couple weeks of spring ball.

“We are going to try and put pressure on them every day to perform at a high level, and I think they are responding well,” Brohm said. “I think we just keep working hard and we’ll get it done.”

The Toppers will be back on the field for spring practice again this week. Their next practice will start bright and early at 5:45 a.m. at Smith Stadium.