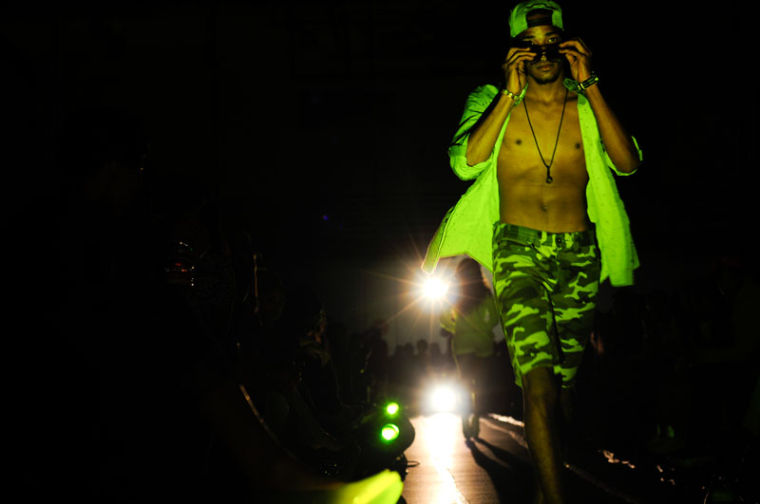 Former Louisville student Dante Duncan struts down the runway and makes eye contact with a cheering crowd. Duncan has been a part of this event for the past two years and had to participate this year despite not being enrolled in school this semester.

The atmosphere in the Preston Center lobby before the fourth annual Rip the Runway fashion show on Friday night was one of lighthearted chatter and obvious excitement. Many held canned goods as they waited patiently to be let into the gym.

Louisville Junior Bryelle Bonds, who attended Rip the Runway in previous years, said she knew the show would be good in its newest location.

At 8:30 pm the crowds made their way to the blue courts where a runway was taped off on the floor and chairs were set up on both sides of the stretch.

Although Nashville junior Sean Watson thought the runway would be on a platform, he liked that it was in a different location from previous years. While he was excited for the show, he thought they could have utilized more of the gym.

Bonds was pleased with the new location because there was more room in the Preston Center than in the DUC Auditorium, where she attended Rip the Runway last year.

“That, and the gym wasn’t nearly as hot,” she said.

The chairs filled quickly and the gym was alive with talk and music. By 9 pm, the models were ready to strut their stuff.

And strut they did.

The first scene was all about personal style. The confidence that exuded from the entire lineup was staggering. In a flurry of impossibly high heels, blue lips, and walks worthy of a bigger runway, thirty-one models showed off their own style. High waisted jeans and cut off jeans were both trending as many models wore variations of the styles.

One model, Louisville junior Paige Freeman, really enjoyed the setup and how interactive the show was this year.

“The location was great,” she said. “It just made the crowd feel like part of the show because the chairs were so close to the runway.”

The second scene’s theme was the four seasons. Starting with spring, the models displayed clothes in bright colors with a concentration on yellows and reds. Many wore sunglasses and the male models showed off pastel shorts. The other three seasons blended together, sending a jeans-and-scarf model down the runway after a bikini clad model.

The third scene was dubbed the Urban Scene, sponsored by Christ Boutique. Cut off jeans, graphic tees, and crazy patterns came in full force. As the models walked, their struts became more confident and their faces relaxed, even laughing, and interacting with the audience.

The formal scene came fourth. The ladies turned out in full force, wearing peplum sparkling dresses that showed off long legs. The men employed a business casual look, many having flung their jacket over one shoulder.

The most emotional scene came toward the end. Named “Wild for Cheryl,” the scene was a tribute Cheryl Williamson, a student fashion designer who had a huge impact on Rip the Runway during its first three years.

Freeman said the Wild scene was her favorite.

“Cheryl was a dear friend of mine,” Freeman said. “She loved fashion so we modeled clothing that was exactly like what she would have put in the show if she had been here,”

The make up for this scene reflected Williamson’s flair. Rhinestones were glued to the models’ faces along with shimmering lipstick and lots of blush.

The sixth and final scene featured the same shirt on all of the models: I [heart] Rip the Runway. As every model from every scene filed onto the runway, they faced loud applause.

Bonds thought the show had a really good turn out and was a definite success.

Freeman said it had an amazing outcome and was a lot of fun. There was one thing, though, that she thought others should know.