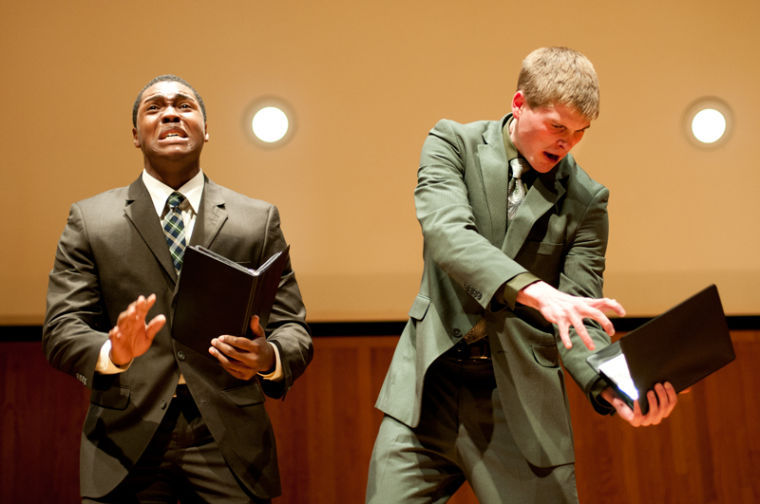 Speech, debate and dramatic interpretation were all on display when the WKU Forensics Team held a showcase on campus Saturday night.

“I know what you are thinking,” co-host Emma Collins said. “Forensics — I’ve seen that on TV. You guys must be really good at dissecting dead bodies. And to that I say, maybe.”

But in reality, the forensics team doesn’t do crime scene investigation. The team performs speech and debate.

This showcase served as not just a performance for the community, but as a rehearsal.

The forensics team will compete in the American Forensic Association National Individual Events Tournament on April 4 through April 9.

“We’re here to showcase what we do as a team,” Hodgenville sophomore Ellis Fraser said.

The piece, a compilation of several poems about the Birmingham Church bombings of 1963, ranged from outlandishly humorous to devastatingly emotional, and Wilson’s performance was met with a standing ovation.

Wilson said he put a lot of time into his performance.

“I worked once a week for an hour and a half since December,” Wilson said. “Given this year’s the 50th anniversary of the bombings, I felt like this is something that is important to talk about for black history and American history.”

But despite the overwhelmingly positive response Wilson received, he said he and the rest of the forensics team are still working to become better.

“I will be working to improve all the way up until nationals,” he said.

Allison Linn, a junior from Knoxville, Tenn., said she was at the showcase to show her support for the team.

“These people are my friends,” she said. “There are some really cool people involved with this team.”

Marshall Covert, a junior from Twin Cities, Minn. who has been on the team for three years, talked about the importance of the skills he is learning as a part of the forensics team.

“No other activity prepares you for so many types of speaking,” he said. “Being confident in yourself is so important.”

Brittany Broder, a freshman from St. Charles, Mo. and a first year member of the forensics team, talked about the upcoming national competition the team will take part in.

“I love seeing my teammates do what they do,” she said. “We are very prepared.”