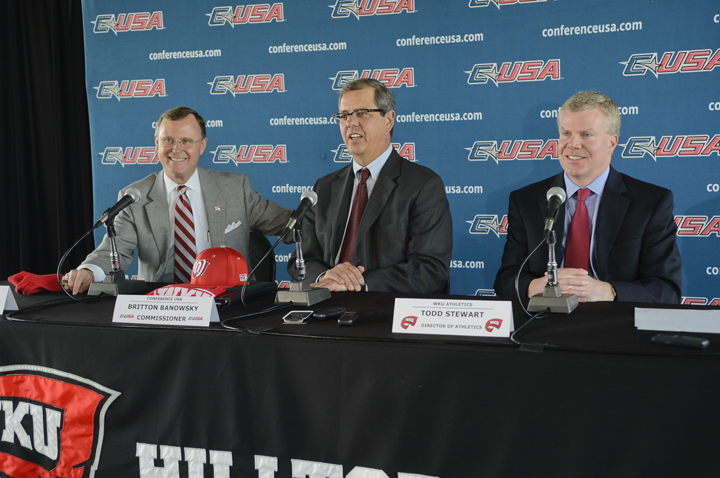 The forces of NCAA realignment finally made their way to Bowling Green as WKU announced Monday that the school is set to join Conference USA.

The WKU Board of Regents approved a motion to join C-USA in a meeting Monday morning and the move was confirmed in a press conference at the Harbaugh Club at Smith Stadium that afternoon. WKU will officially join the new athletic conference on July 1, 2014.

“This represents a landmark moment for our university and community and we are extremely excited about the significant opportunities that await,” Stewart said.

Banowsky was also in attendance at the Harbaugh Club. He said the conference expressed a lot of confidence in WKU’s athletic future by extending an invitation to C-USA.

The move ends WKU’s 31-year run in the Sun Belt Conference, which began in 1982 and helped WKU football make the jump to becoming a Football Bowl Subdivision program in 2009.

However, the state of the Sun Belt had taken a drastic turnover the course of the past year.

Sun Belt members Florida Atlantic, Florida International, North Texas and Middle Tennessee all announced in the past 12 months that they would also be making the jump to C-USA. The Sun Belt attempted to counter these moves last week by adding four schools — New Mexico State, Idaho, Appalachian State and Georgia — but it was not enough to keep WKU.

Geography also had a lot to do with WKU’s decision. Moving to C-USA allows WKU to compete with local rival MTSU and keep most opponents in the southeast — the Toppers would have to travel west to face NMSU or Idaho once a year if WKU stayed in the Sun Belt.

Ransdell said reducing travel times to road games for WKU student-athletes and fans was a big reason he and Stewart decided to pursue an opening in C-USA.

Moving to C-USA also rebuilds some traditional rivalries for WKU, reuniting the Toppers with current Sun Belt rival MSU as well as older Sun Belt foes such as Alabama Birmingham and Old Dominion.

“Just the energy of making this move, the opportunity to restore rivalries — there’s so much about this that is positive for WKU and I’m very proud of the fact that we’ve taken a proactive step to create a better future and a more financially secure future,” Ransdell said.

The move will have a big impact on the WKU athletic budget.

By notifying the conference over 12 months before WKU leaves, the school will not be responsible to pay any exit fee to the Sun Belt. The entrance fee for C-USA is $2 million, to be paid over the course of a couple of years.

Moving to C-USA should bring more money in to WKU to cover some of that fee. The Toppers will pick up extra money through C-USA’s television deal with Fox and will have more opportunities to earn bowl berths in football.

Realignment has taken hold of college athletics over the course of the art couple of years, with dozens of schools switching to bigger conferences with more lucrative TV deals.

Stewart said the money coming in from the conference, along with the higher level of competition WKU will compete against, made this move hard to pass up.

“Partnering with institutions we have enjoyed long-standing and meaningful rivalries with will enhance the gameday experience, grow our fanbase, and increase the level of energy and excitement our programs and community deserve,” Stewart said.