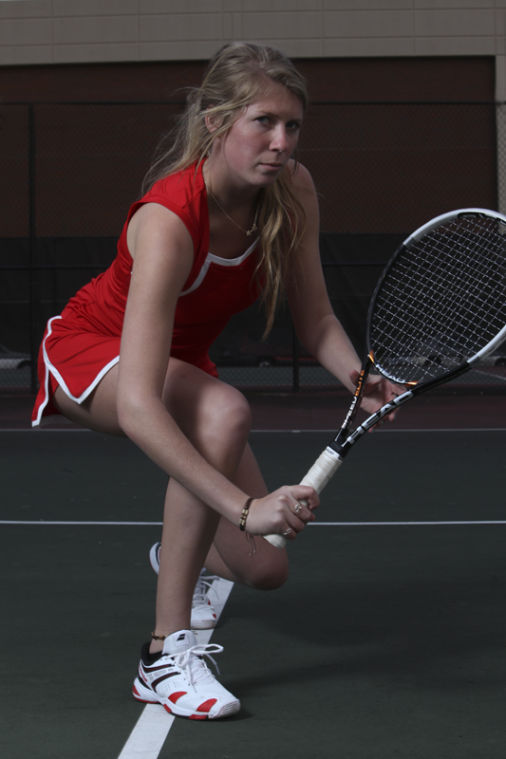 Louisville sophomore Maddie Phillips has been playing tennis since she was 5 years old. At WKU, she plays either first court doubles or second or third singls. "I have to play both each match," Phillips said.

Tennis is a sport where one must invest time and emotion in order to succeed. It requires a lot of hard work and dedication before one can reap their rewards. For some, tennis is more than just a sport.

“If it wasn’t for tennis, I wouldn’t be here,” said junior Carolina Barboza. “It’s 90 percent of my life.”

Barboza is a 21-year-old advertising major from Montevideo, Uruguay.

She has been a member of the WKU women’s tennis team for two years, and she said tennis is very important in her life.

Barboza has been playing tennis since she was 4 years old. She said her decision to play tennis “just happened.”

“I used to go to this country club where my parents played, and I just picked up a racket myself and started playing,” she said.

Barboza said playing for the team motivates her.

“I don’t even play for myself. I play for my teammates,” she said. “We’re really close.”

Barboza and one of her teammates, Nashville junior Alex Crofford, won a double’s match together at the Sun Belt Conference tournament last year.

Crofford said that she uses tennis as a stress reliever.

“It just gives me a chance to get my mind off of school and all the things that I’m doing and focus on something else,” the 20-year-old biology major said.

Crofford said her decision to play came from her family. Her father played for the University of Tennessee, and her brother plays for UT Chattanooga. Crofford’s sister, Gabby, is also a member of the tennis team at WKU.

Lexington junior McKinley Mason has also been influenced by her family to take up tennis.

“It has just run in the family,” the 20-year-old chemistry major said. “Everyone in my family plays, so I just kind of grew up with it.”

Mason said she couldn’t imagine what her life would be like without tennis.

“Tennis has always been a part of my life,” Mason said. “It just takes up a significant amount of time, so I feel like I’d have a lot of free time without it, but I would also go crazy if I can’t play.”

Mason said the tennis team bonds on road trips and has come up with team songs and inside jokes.

“We have this team joke where coach will ask us questions and if we don’t know a certain question he’ll make a funny comment like ‘Get the notebook.’” Mason said. “The notebook is an inside joke on our team.”

Louisville sophomore Maddie Phillips, another member of the team, said she has many memories of her involvement within the team.

“Spring break was pretty memorable,” Phillips said. “We were all just together having fun.”

“Honestly, I’m kind of burnt out a little bit because I have been playing it for so long,” Philips said. “But winning gives me a satisfaction and just knowing that I’m playing for a team.”

Phillips said tennis was important to her because she was awarded a scholarship.

“I feel a big responsibility of owning up to that and performing at the best I can.”